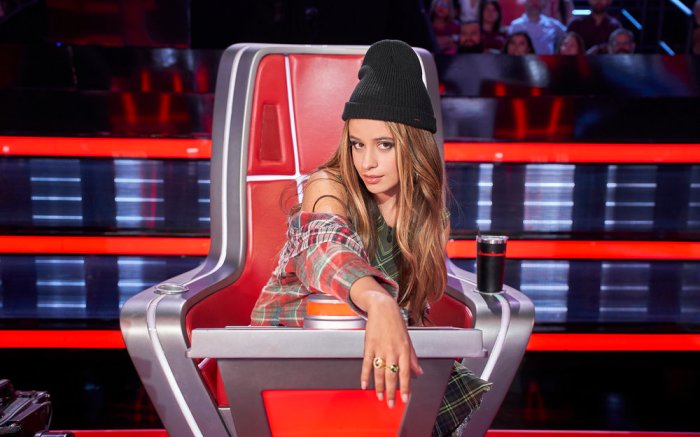 Camila Cabello went grunge-style for the first day of the knockout rounds for “The Voice,” which aired last night on NBC. The “Havana” singer is one of the coaches on Season 22 of the singing competition show alongside Blake Shelton, Gwen Stefani, and John Legend.

Cabello wore a long black and green plaid dress to the show. The mermaid silhouette featured a crew neckline with no sleeves. Cabello paired the dress with a red, forest green, and white plaid flannel.

To accessorize, Cabello opted for a set of gold rings that featured an emerald stone.

The Fifth Harmony alum slipped into a pair of towering black platform boots. The patent leather boots featured a laceless design with a round toe and a block heel reaching at least 6 inches in height. The platformed construction helps compensate for the height of the heel, allowing for more height than a traditional pump without any added discomfort.

Cabello’s look was created by the styling duo Mariel Haenn and Rob Zangardi who have also worked with Jennifer Lopez, Cara Delevingne, and Heidi Klum.

The singer kept her light brown hair in a soft wave style underneath a black beanie with her minimal makeup featuring neutral eye look and a mauve lip. Her glamorous look was created by hair stylist Dimitrtis Giannetos and makeup artist Patrick Ta. When not working side by side on a look for Cabello, they can be seen working with other stars like Megan Fox, Meghan Trainor, and Gigi Hadid.

Cabello’s versatile style usually gravitates towards casual footwear and sneakers from brands like Adidas and Nike. In the warmer months, she is most likely slipping into a pair of slides or sandals from Franco Sarto, Steve Madden, and Birkenstock. If she’s making a red carpet appearance, she will slip on a designer gown or pair of stilettos from labels like Isabel Marant, Dolce & Gabbana, and Versace.