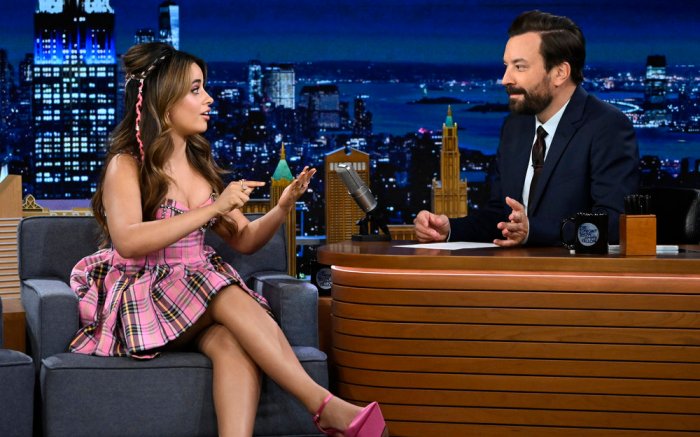 Camila Cabello travel back in time and brought the ’90s Emo-style back for her latest appearance on “The Tonight Show Starring Jimmy Fallon” yesterday night. The 25-year-old singer visited the talk show host to talk about UFO footage, working with Blake Shelton on “The Voice”, and playing a game called “Songmojis” against Fallon.

Cabello wore a bubblegum plaid pink minidress by Area, that featured a crystal-embellished corset top with studded spaghetti strap sleeves. She accessorized with pink starfish earrings and an assortment of pink and silver rings.

Cabello was styled by Rob Zangardi for the late-night show. The stylist has also worked with Jennifer Lopez, Lily Collins, and Mila Kunis.

The singer kept her dark brown hair in a hair-up style adding a pop of color with two pink braided extensions. Her minimal makeup featured winged eyeliner and a nude lip. Her glam team for the look was hairstylist Sarah Potempa and makeup artist Carolina Gonzalez. The two have worked on other stars including Megan Fox, Sabrina Carpenter, and Gigi Hadid.

Cabello has joined “The Voice” as one of this season’s coaches alongside Gwen Stefani, Blake Shelton, and John Legend. It is only the first week of the battle round and the singer has already been coming in full force with her show-stopping outfits for the singing competition. For the season’s promo, Cabello came in hot with a fiery Saint Laurent cut out jumpsuit. The Cuban star’s style is versatile. On a casual day, Cabello is seen in tops and bottoms from H&M and Zara while on the red carpet, the singer is seen in high-end labels like Dolce & Gabbana and Versace.