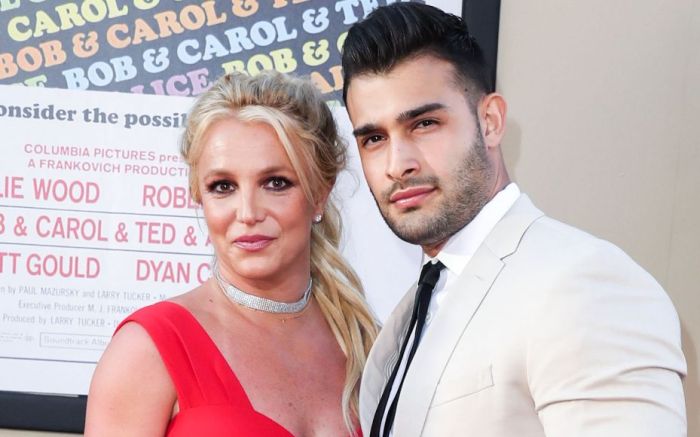 Britney Spears pulled out all the punches in her fiancé’ Sam Asghari’s Instagram video on Sunday.

The hitmaker and her fiancé are seen standing parallel to one another by a pool in Las Vegas, where they took a weekend trip to Resorts World. As the video starts playing, Spears can be seen throwing a fake punch at Asghari’s face, who then flips into the pool. And she did it in style.

Spears slipped into a pair of fitted black low-waisted pants, which she paired with a lighter-colored crop top that featured long sleeves. On her feet, she wore pointed-toe heeled shoes that gave the star a little bit of height.

Asghari stood opposite Spears wearing a plush white bathrobe with no shoes as he flipped into the water.

Asghari captioned his post “Fellas don’t ever piss off your woman. Ever…  @britneyspears best caption wins!”

Spears has been looked at as a fashion icon for over a decade. From her matching denim moment with Justin Timberlake to her metallic pink tube top and platform sneakers, the star’s looks remain important in the pop culture and fashion world. With the rise in popularity of ’90s/Y2K trends, Spears’ early fashion moments are constantly being looked to for inspiration.

When it comes to her current day-to-day shoe style, the “Baby One More Time” singer tends to rotate between pointed-toe heels that give her looks a sleek and polished finish from affordable brands such as Steve Madden as well as black ankle boots, giving her a more edgy flair. Her off-duty wardrobe also includes Amaranti wedges, Ugg and Impo boots as well as Manolo Blahnik pumps.

Flip through the gallery to see Britney Spears’ most daring red carpet looks through the years.