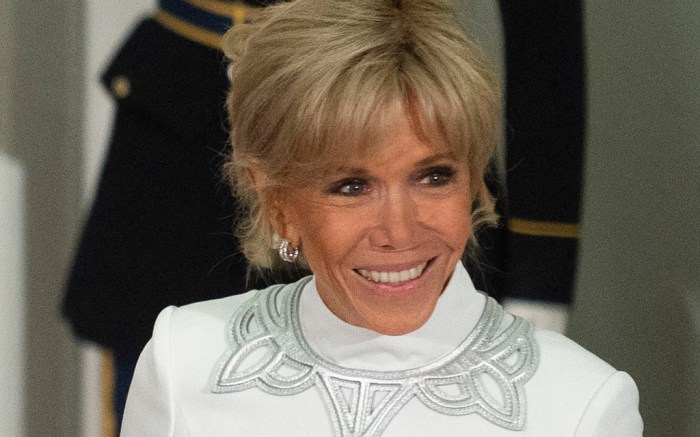 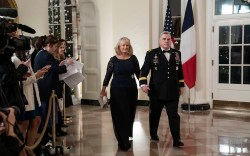 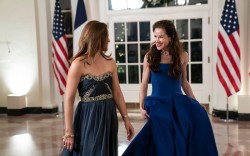 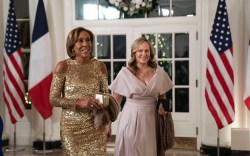 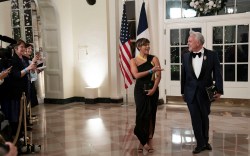 Dressed in Louis Vuitton, Brigitte wore a classic white column dress. The ensemble featured silver trim around the neck and waist. Brigitte carried a silver clutch and also sported silver hoops to match the sparkling details on her gown.

On her feet, Brigitte sported silver pumps with pointed toes and a reflective metallic sheen. The pair was accompanied by 3 to 4-inch stiletto heels, slightly elevating her outfit.

Brigitte’s minimalist wardrobe is regarded as a standard for the French-chic aesthetic. She often wears blazers, dresses and pantsuits, as well as skinny jeans and trousers, in sharp neutral tones. For formal occasions, she dons elegant dresses and gowns with minimal embellishments, with most ailing from French labels like Alaïa, Alexandre Vauthier and Dior.

When it comes to footwear, most of the French first lady’s shoes are by Louis Vuitton, which is one of her go-to brands — she also counts Vuitton designer Nicolas Ghesquière as a close friend. She can often be seen in pointed-toe pumps and sporty sneakers in similarly chic colors.

The White House state dinner hosted by President Joe Biden and his wife and first lady Jill Biden took place yesterday Dec. 1st in Washington, with more than 300 attendees including government officials, French fashion designers, actors and donors. The state dinner is held to celebrate diplomatic ties between the host and guest countries. President Emmanuel Macron of France and his wife Brigitte Macron made an appearance at the event along with John Legend and Chrissy Teigen, Jennifer Garner, Christian Louboutin and many others.
PHOTOS: White House State Dinner With Emmanuel & Brigitte Macron Guest Arrivals