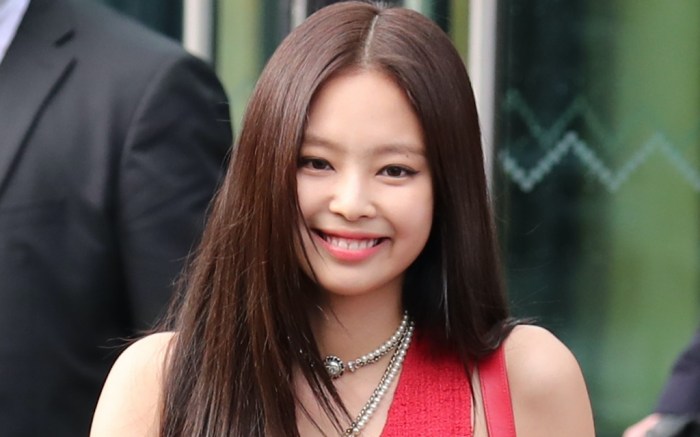 After dominating at the 2022 MTV VMAs along with her girl group members, Blackpink’s Jennie took a stroll in Soho New York City to stop by a billboard with editorial images from her shoot with Calvin Klein for their Fall 2022 campaign, capturing the special moment on Instagram today. The K-pop idol took photos near a crosswalk before grabbing something to eat, the star clad in a street style inspired outfit with sporty shoes.

Channeling the 90s the “Solo” songstress wore a plain white tank which she layered underneath a light grey vest trimmed with faux-fur. The New Zealander donned low rise grayish blue trousers fitted with multiple pockets and silver hardware with an oversized fit that evoked those Y2K vibes. Jennie kept on theme, shading her eyes with thin black sunglasses. “The Idol” actress wore her black hair up in a sleek updo accentuated with curled face-framing strands.

Hitting the streets of the Big Apple meant wearing the right walking shoes with a stylish flair fit for the South Korean singer. In the name of comfort, Jennie wore sporty oversized white and black Adidas Astir sneakers with a silver finish that made the shoes shine. Chunky sneakers were first popularized in the 1980s for their practicality, comfort and stability. Though the sneaker style’s popularity slowed in the 2000s, chunky sneakers reemerged as part of the divisive “ugly” shoe trend in the late-2010s, capturing the attention of all genders.

As far as shoes go, Jennie typically opts for chic and classic styles. As a Chanel brand ambassador, the “Lovesick Girls” singer can frequently be seen in the luxury brand’s boots, pumps and sandals. However, she’s also donned heels by Nodaleto, Schutz, Gianvito Rossi and other luxury brands as well. Off-duty, she can be seen in slides, boots and sneakers by Clergerie, Vivienne Westwood, and Adidas.