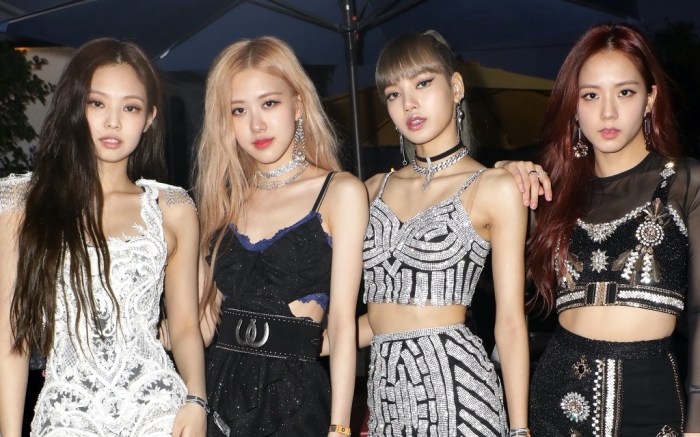 After the success of their new single “Pink Venom” K-pop superstars Blackpink made their way to New York to prepare for their performance at the MTV Video and Music Awards. The girl group arrived at JFK Airport on Aug 26 in trendy airport fashions that included a variety of footwear options.

Jisoo led the pack in a black and white ensemble that consisted of a black mini skirt with a black matching long sleeve top layered over a white collared shirt with even longer sleeves. The lead vocalist wore a white mask and grey Hello Kitty headphones with pink accents that matched her phone case and nails. Finishing off the outfit strong, Jisoo wore black leather boots that stopped just below the knees.

Rosé and Lisa followed suit, both parties wearing baggy athleisure style ensembles for their flight. Rosé wore shiny brown oversized pants that sat low on her hips, the main vocalist pairing the 2000s-esque trousers with a white and black cropped sweater and finished the outfit off with a black face mask.

A lover of street style, Lisa wore grey sweats and a matching cropped grey tee. The dancer and BVLGARI partner threw on a blue velour zip up hoodie and a dark blue baseball cap with a mask, effectively hiding her face from the cameras.

Both Rosé and Lisa wore chunky white “dad” sneakers, adding to that “cool girl” street style aesthetic both bandmates have going on.

The face of the group Jennie was not pictured but the Chanel ambassador wore a grey and black sweat set, keeping up the casual vibes.

Blackpink will be performing “Pink Venom” at the 2022 MTV Video and Music Awards on August 28. The show, which marks the group’s U.S. awards show performance debut, will be held at the Prudential Center in New Jersey.

PHOTOS: See Blackpink’s most fashionable moments over the years.