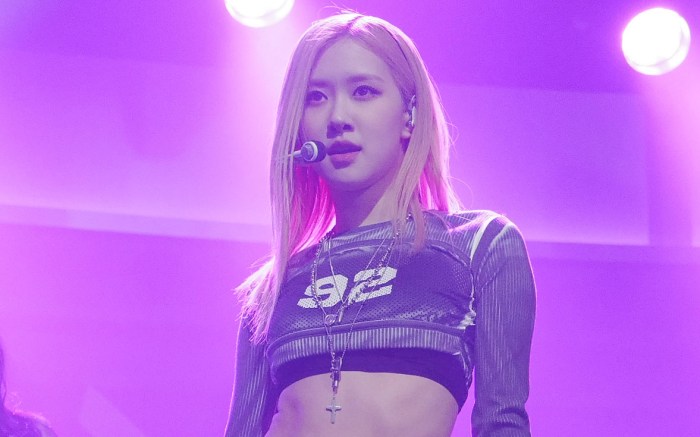 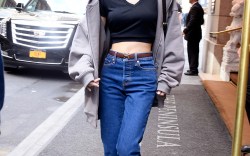 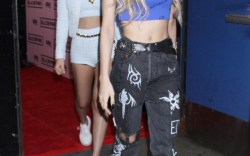 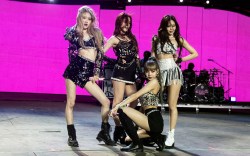 Blackpink arrived to perform on “Jimmy Kimmel Live!” arranging their outfits around their love for black boots. The K-pop group, which includes Jisoo, Rosé, Lisa, and Jennie Kim appeared on the late-night show to promote their new single “Shut Down.” The group was accompanied by a squad of eight dancers who wore black crop tops and matching shorts.

Rosé wore a charcoal grey crop top emblazoned with the number 92, a black mini skirt belted with a black leather double grommet belt, and black boots that had a denim leg-warmer style shaft. She accessorized with several silver chains, including a silver cross. As always, her signature pink hair popped from the other group members.

Lisa wore a black corset top over a white cropped tank top, paired with a red snakeskin print skirt, and black studded creeper boots. She coordinated with Rosé and wore a silver chain around her neck. Her skirt also had a belt chain.

Jennie Mae wore an asymmetrical trip that was half printed fabric and half sheer. The highlight of her outfit were her denim shorts, which featured feather embroidery on the pockets and a feather trim. She opted for black combat outfits, rounding out the quartet’s black footwear selections.

This fall is poised as a busy one for Blackpink. The group just released their second studio album “Born Pink,” featuring their single “Shut Down,” and will be promoting it over the coming weeks. In October, they will kick off their Born Pink World Tour with stops in South Korea, North America, Europe, and Australia.

Blackpink’s recent “Jimmy Kimmel Live!” appearance marks the second time the group has appeared on the show. Their first appearance was two years ago when they promoted their LP “The Album.”

PHOTOS: Lisa From Blackpink’s Best Shoe Moments Over the Years