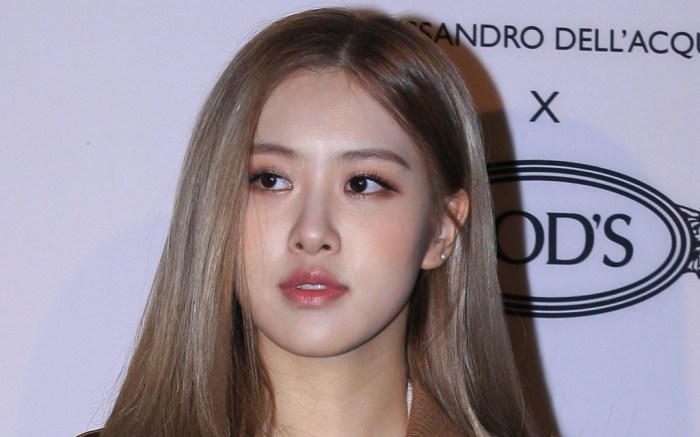 The “On The Ground” singer posed in a matching denim set by Korean fashion brand Oi Oi. Her look included a collared short-sleeved crop top, as well as a pleated miniskirt. Both pieces featured a patchwork texture from numerous hues of blue denim, cut into angular shapes. Rosé completed her look with an unexpected but romantic accessory: a vase of white flowers.

When it came to shoes, the “How You Like That” singer wore a pair of sleek strappy sandals. Featuring black patent leather uppers, the style included thin toe straps and angular buckled slingback straps. The pair was complete with stiletto heels, totaling at least 3 inches in height. The pair gave the star’s sweet outfit a slick edge, while also proving its versatility with a classic hue and silhouette.

Sandals like Rosé’s are a timeless staple to any heel-lovers’ wardrobe. Most styles feature slingback straps that wrap around the wearers’ heels for a “naked shoe” effect. In addition to the musician, stars such as Adele, Kirsten Dunst and Gemma Chan have been spotted in slingback heels by Bella Bella, Louis Vuitton and Prada in recent weeks.

For footwear, the “Ddu-Du Ddu-Du” singer often wears slick sandals, pumps and boots by Saint Laurent, which she’s also a global brand ambassador for. During performances and music videos, Rosé can be seen in chunky boots and platforms from brands including Club Exx, Eytys and Dolls Kill. Off-duty, her casual looks often feature Adidas sneakers, as well as loafers and boots by Vetements and Dr. Martens. Aside from wearing stylish shoes, the singer is also a brand ambassador for Tiffany & Co.

Elevate your winter looks in sleek sandals like Rosé’s.

Click through the gallery to see Blackpink’s fashionable looks over the years.