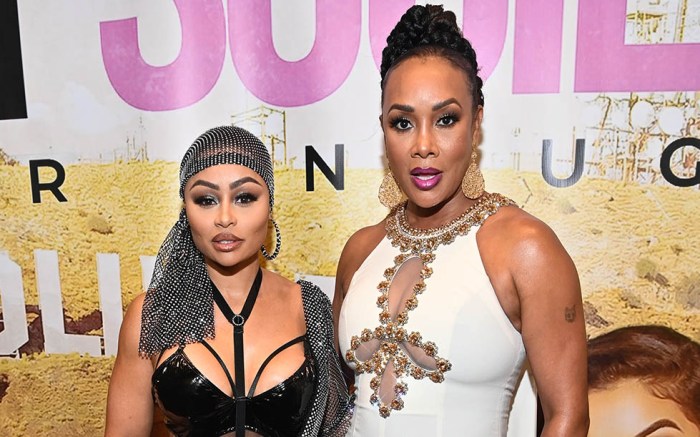 Blac Chyna may be flexing her acting skills in a new Amazon Prime drama, but the 34-year-old model and actress is also using the film’s press run as an opportunity to display her fearless fashion sense. To attend the recent premiere of the upcoming film “Secret Society 2: Never Enough,” Blac Chyna leaned on a custom look with glittering crystal detail.

To attend the July 26 premiere in Atlanta, Blac Chyna wore a custom handmade design centered around a crystal-embellished black fishnet material. The gleaming look was created by stylist Hollywood Larry. The outfit — which was built upon a black lingerie-inspired bodysuit with patent leather and mesh detail — featured a crystal-embellished black fishnet coverup with a single sleeve and a mini skirt-like draping. Blac Chyna wore a matching headwrap, her hair hidden beneath the fishnet fabric.

For footwear, the star wore black patent leather pumps. She accessorized the look with a back harness around her neck and large black hoop earrings decorated with crystals. The actress also wore a glam statement makeup look centered around a shimmering smoky eye, statement lashes and a glossy nude lined lip. And let’s not forget to mention her dagger-like French tip stiletto nails.

While on the red carpet, Blac Chyna posed with co-star Vivica A. Fox, the pair celebrating their shared film’s premiere. Fox wore a white Zuhair Murad jumpsuit with gold trim, cutout accents and a statement cape. She paired the look with gold Christian Louboutin stiletto sandals.

Blac Chyna and Fox star in “Secret Society 2: Never Enough,” which is the sequel to the 2021 film “Secret Society: All We Have Is Us.” The Hollywood drama — which also stars Jeremy Meeks, Reyna Love and Adejah Parrish — is set to be released on July 29 on Amazon Prime.