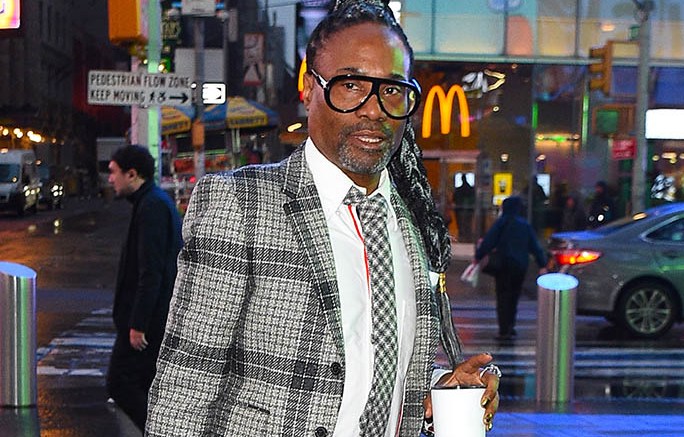 Billy Porter put a sporty spin on traditional suiting while out in New York City on Monday night. The “Pose” star was spotted hitting the streets of the Big Apple in stylish printed threads.

Porter made his way around town in a clash of patterns. The Tony Award-winning actor wore a grey pinstripe blazer. He complemented the double-breasted overcoat with a white button-down shirt and checkered-print tie.

Porter tucked both his button-down shirt and tie into a knee-length skirt. The skirt had a wide waistband and dramatic pleats that were decorated with bold grey stripes.

Sticking to a business-chic moment, the Broadway star accessorized with black oversized glasses and carried his essentials in a large dark grey bag. The accessory had two thick straps, a gold embellishment at the center and included a blue, white and red stripe at the bottom.

When it came down to shoes, Porter completed his look with chunky sneakers. The silhouette gave the illusion of loafers due to its stitched lining and triangular shape. The two-tone sneakers featured a high counter at the back for extra support and were set on a thick black and white striped outsole. The shoes also included black laces and had a rigged sole for greater traction.

Porter’s essential clothing style consists of effervescent patterns, printed muumuus and ruffled separates. He is known to blur lines and promote a more gender-fluid aesthetic. The “Cinderella” star often creates fashion moments that generate new discussions about gender as it relates to fashion. Throughout his career, Porter has donned avant-garde looks from brands like The Blonds, Christian Siriano and Sarah Sokol.

PHOTOS: Click through the gallery to see some of Billy Porter’s best red carpet fashion moments.