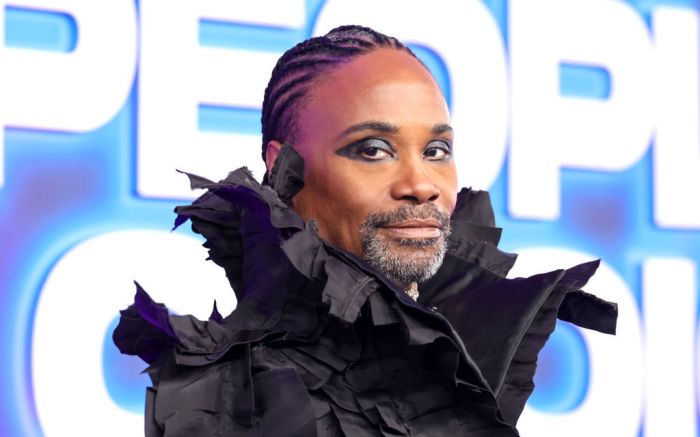 Billy Porter made a head-turning entrance as he arrived at the People’s Choice Awards in Santa Monica, Calif., on Dec. 6. Although the actor was not nominated for any awards, Porter presented the Music Icon Award to Shania Twain.

The “American Horror Story” actor opted for a monochrome look for the night with a long, black ruffled top that featured a distressed popped collar and three-quarter sleeves. He added a black leather belt around his waist. The actor paired the look with a pair of black wide-leg pants.

Porter opted for silver-toned accessories with a diamond statement necklace that matched his sparkling bracelets and assortment of statement rings.

The “Stranger Things” singer’s footwear was hidden by his long pant legs. It would be no surprise if he slipped into a pair of towering platform boots. Porter usually gravitates towards statement styles that consist of unique patterns and colors that are paired with textured materials.

His gender-fluid aesthetic has created new discussions in fashion and has also inspired designer labels to create an inclusive space. Last year, the actor worked with Jimmy Choo on a pride-themed capsule collection that featured metallic stacked heels and animal-printed loafers.

Porter kept her dark brown hair in a sleek braided style that kept the attention on his dramatic makeup that featured a daring black eye look.