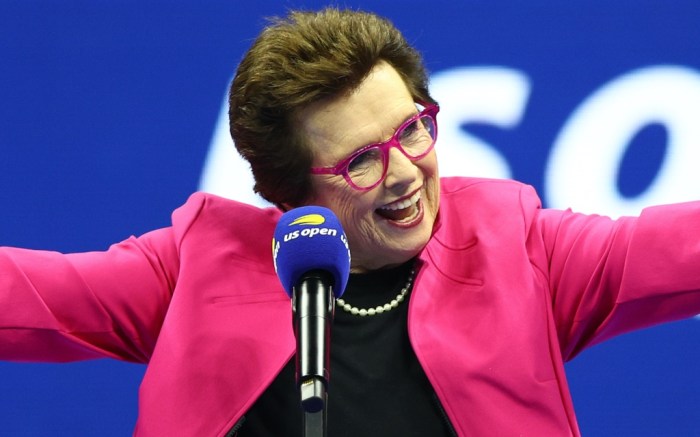 Arriving at her own USTA Billie Jean King National Tennis Center on Sunday, the tennis star spoke after Serena Williams‘ first match against Danka Kovinic of Montenegro during the Women’s Singles First Round on Day One of the tournament. For the occasion, she wore a bright pink tennis jacket with cuffed sleeves over a black top and belted trousers.

Completing King’s ensemble was a string of pearls, as well as a rainbow-strapped Apple Watch. She also topped off her look with matching pink-rimmed glasses, adding a bright finish to her outfit.

Though King’s footwear was not visible, it’s likely she completed her outfit with a coordinating set of athletic sneakers. The style was trending throughout the tournament, whether worn by attending stars or athletes on the court.

King also took a moment during the event, after Williams’ viral win, to congratulate and speak to the tennis superstar — as well as Williams’ husband, Alexis Ohanian, and their daughter Olympia.