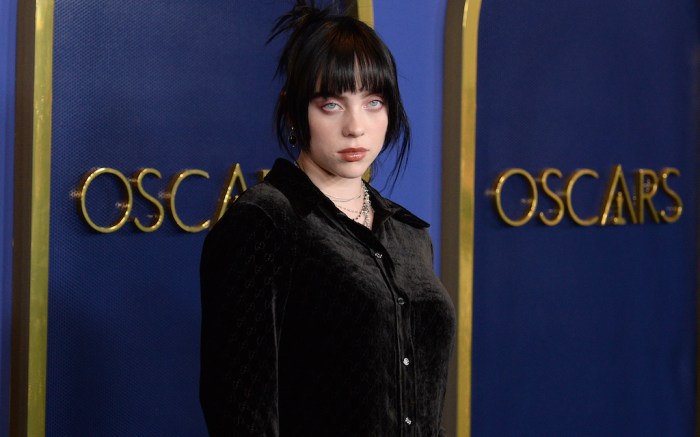 Billie Eilish dons the logomania trend with ease. The “Bad Guy” singer attended the Oscars Nominee Luncheon on Monday night in Los Angeles with her brother, Finneas O’Connell, where she got snapped on the blue carpet. Eilish and her brother were nominated for Best Original Song with their song “No Time To Die” debuting in the latest James Bond film of the same title. The event was star-studded and featured appearances from celebs like Will Smith, Denzel Washington, Jessica Chastain, Penélope Cruz, Bradley Cooper and many others.

For the look, Eilish slipped on a black velvet Gucci button-up that had the brand’s signature double-interlocking “G” emblem dashed all over the garment. On the lower half, she went with a Gucci midi skirt that had the same iconic logo in black and came past her knees. The piece had a black lace accent down one side for a flirty touch.

When it comes to accessories, Eilish went with a series of silver necklaces layered around her neck, sliver dangling earrings embellished with black gemstones and a few silver rings. Also, she threw on a pair of black flouncy socks that incorporated a matching lace trim around the top.

On her feet, she went with a pair of chunky black platform Mary Janes that had silver buckles for a shiny pop. The shoes had a sole height of approximately 4 inches and had two straps across her feet for maximum security.

In 2019, the “Happier Than Ever” singer starred in a fashion campaign for the German luxury design house MCM. She also landed campaigns for Calvin Klein that same year.

The 94th Academy Awards will take place on March 27 and will air on ABC. Some of the other people nominated for the evening include Kristen Stewart (Spencer) for Best Actress, Nicole Kidman (Being the Ricardos) for Actress in a Leading Role, Kirsten Dunst (The Power of the Dog) for Actress in a Supporting Role and Andrew Garfield (tick, tick…BOOM!) for Actor in a Leading Role.