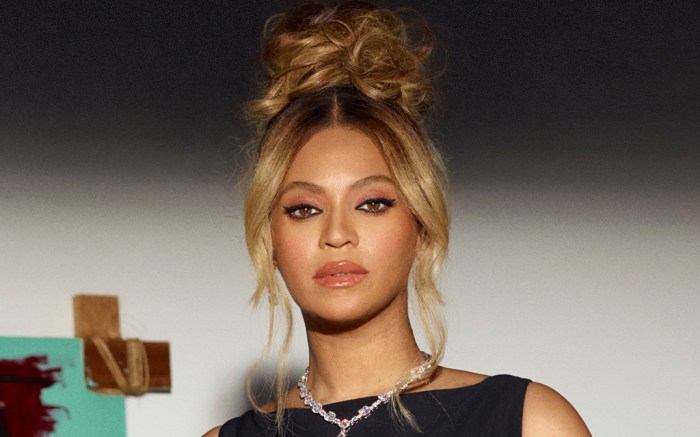 If there’s one thing Beyoncé will do its pull a look together — and surprise her fans. Late last night, the multi-hyphenated entertainer came through with a series of Instagram photos that showed off her look from Jay-Z’s annual Gold Party. The post-Oscars bash was held on Sunday at the Chateau Marmont in West Hollywood, Calif., and attracted a top notch guest list, including stars like Kim Kardashian, Rihanna, Saweetie, Chloe Bailey, Tyler Perry, Daniel Kaluuya, Michael B. Jordan, Lori Harvey and Zoe Kravitz.

It was only right that Queen Bey would step out in an ensemble that would stand out from the A-list crowd. The new uploads immediately drove fans wild as she has been off the grid for a whole month prior to Oscars weekend.

The 28-time Grammy Award-winning singer looked incredible in a risky Celia Kritharioti Couture dress. The garment included smatterings of silver embellishments that were strategically placed against the nude tulle fabric and an extreme thigh-high slit. The “Sorry” hitmaker continued to raise the bar by teaming her gown with a dramatic sheer cape, a diamond knot choker necklace by Lorraine Schwartz and pointy geometric frames.

Staying true to the theme of her look, the “Drunk In Love” songstress complemented her jaw-dropping outfit with long metallic silver nails and styled her signature caramel tresses in long sultry waves. For footwear, she grounded her look with a pair of PVC heels. The transparent pumps had a silver outer sole, a round clear toe and a thick strap that ran along the side of the instep.

There is no denying that Beyoncé is a style icon. She has worn some of the most unforgettable and show stopping looks on and off the red carpet. Memorably, the hitmaker embraced naked dressing at Met Gala 2015 in an ultra-sheer Givenchy dress, also done with strategically placed crystal embellishments, complete with the brand’s heels.

The Ivy Park designer continues to showcase her incomparable style as she went from one dress to another on Oscars night. Beyoncé kicked off the 94th Academy Awards in a tennis ball-green David Koma dress and Amina Muaddi heels. She made a vibrant statement at the actual ceremony pairing a billowing yellow Valentino gown with a matching off-the-shoulder cape that wrapped around her arms for added volume and drama.

Click through the gallery to see Beyoncé’s best red carpet looks over the years.

Give your next look a slick edge with clear heels.