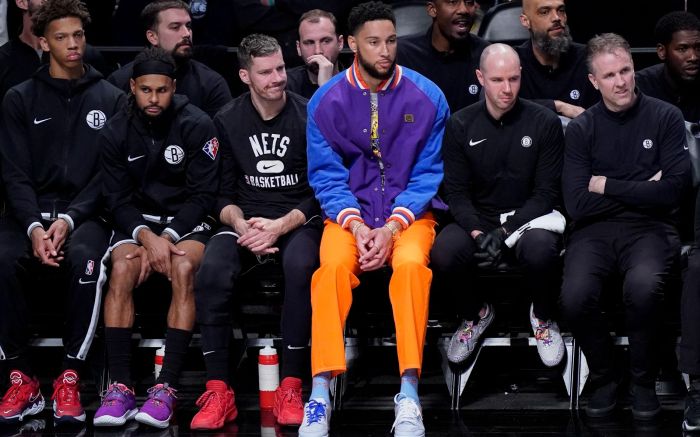 Ben Simmons stunned off the court this time in a colorful outfit that has everyone going crazy on Twitter.

The basketball star stood out from the courtside crowd wearing a purple, blue and orange denim bomber jacket with distressed detailing around the collar and on the sleeves. Underneath, Simmons wore a graphic T-shirt in gray with skeletons dribbling a basketball on fire. The scene on the tee is one you have to see to believe, clearly leaving a strong impression on NBA fans everywhere.

Simmons coordinated with a pair of bright orange slacks, further grabbing attention with his colorful taste. The Nike athlete topped it all off with rose-gold reflective shades and gold and diamond bracelets. He also wore a ring and a larger-than-life watch, also in gold. On top of all the fun accessories, the basketball player added colorful socks in blue and red.

For footwear, Simmons wore a pair of baby blue Nike sneakers with mismatched laces. The laces go from white to a vibrant blue, adding a seriously cool touch to the look. The sneakers are slick, especially when paired with his fun socks.

Overall, the look is sensational, filled with striking colors and textures. It’s a playful and quirky outfit that certainly had heads (and tweets) turning. Some observers on social media compared Simmons to Willy Wonka, a bag of Skittles, The Joker and Skeeter from “Doug.”

Simmons really went for the most colorful look possible and in doing so, he created a striking style statement that Twitter and fans of basketball can’t get enough of.

Ben Simmons out there looking like Skeeter from Doug pic.twitter.com/5qBPCznykB