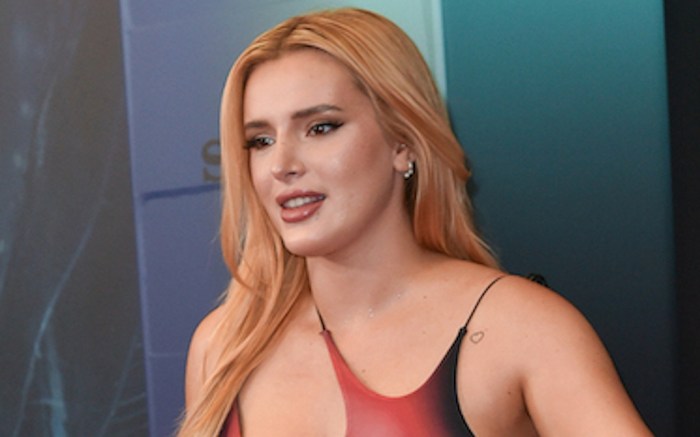 Bella Thorne knows how to give a striking moment on the red carpet, and last night was no exception when the “Scream: The TV Series” star attended the Los Angeles premiere of “Morbius” alongside her older sister Dani Thorne.

For the outfit, Thorne went with a red screen-printed bodycon dress from Sergio Castaño Peña that had a woman’s naked body illustrated in edgy, eye-catching detail. The asymmetrical halter dress came down to her calves and gave a seamless finish.

Thorne went bold with her accessories and wore two diamond-encrusted silver watches, a couple of silver bracelets and  diamond rings.

Thorne also returned to her roots as a blonde and departed from her signature fiery red hair. “I’m naturally blond, but I feel at home when I’m a redhead. But I might go brown!” Thorne said told Us Weekly in February 2016, adding that she likes brown too.

Thorne slipped on a pair of pointed-toe red metallic pumps. The heels had a height of approximately 4 inches and rounded her outfit out with a perfect touch of glimmer.

Meanwhile, her sister Dani went with blue and pink streaks in her hair, but it was her outfit that was the most eye-catching part of her look. The influencer had on a leather bralette that revealed the lower portion of her bustline. She also embraced the micro miniskirt trend — constructed with a zipper down the middle and chainlink details. Chunky platform boots with buckled straps that climbed above the calves and a spiked collar emphasized her punk image.

Thorne has a chic yet edgy sartorial aesthetic. In fact, last year at the “Time Is Up” premiere in Rome, Thorne wore a black Versace gown that had a thigh-high slit paired with matching pointed-toe pumps for an elegant moment.

Thorne has also made a name for herself within the fashion industry. She starred in a series of campaigns for Candie’s and Buxom. She has also made an appearance in ads for brands like Six:02 and Diesel.