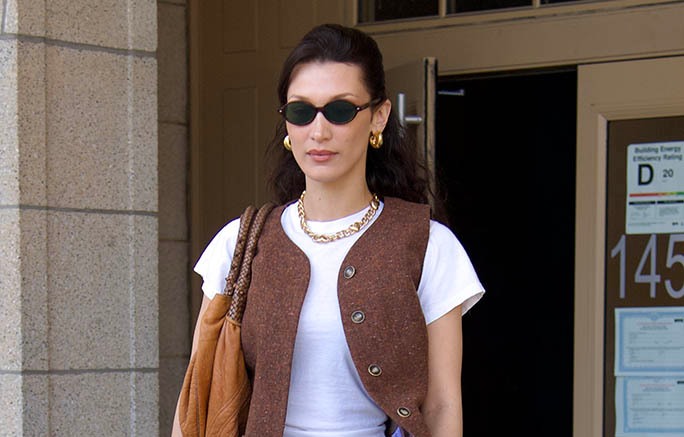 Bella Hadid put her own spin on a Western-inspired outfit while out in New York City on Wednesday. The supermodel was spotted leaving her apartment in the Big Apple.

Hadid opted for an ultra-chic ensemble for the outing. She wore a textured brown vest over a white short-sleeve T-shirt. She paired the garments with chocolate leather pants. The bottoms had a slight flare on the leg and a cropped hemline.


To amp up her look, the Riccardo Tisci muse added a slew of gold accessories, including a chain belt that had a bold clasp at the center, chunky hoop earrings, several bangles, midi rings. In addition to her jewelry, Hadid touted her essentials in a tan handbag and blocked out the sun rays with round vintage frames.

She pulled some of her brunette tresses back and let the rest cascade down her back. Hadid elevated her spring outfit with chunky leather snakeskin loafers. The mustard-colored silhouette had a thick sole and sat atop a square block heel. Often made of leather, loafers are slip-on shoes worn by all genders. Loafers were first popularized in the 1950s amongst men, yet evolved over time into many styles and silhouettes.

Hadid might be known for her extensive modeling career, but her street style is just as notable. For footwear, she frequents in styles from Adidas, Nike, New Balance and Yeezy Foam Runners. For red carpet events, she tends to gravitate towards sharp pointed-toe pumps and sandals from top brands including Christian Louboutin, Fendi and Miu Miu.

Click through the gallery to see Bella Hadid’s street style evolution over the years.

Elevate your ensemble with a pair of chunky loafers.