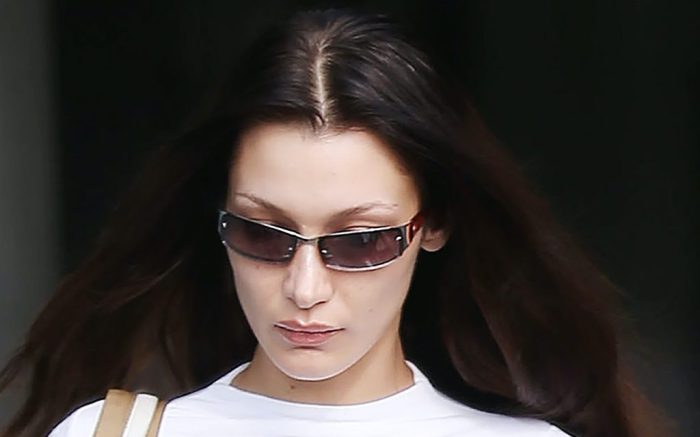 While lounging on a dais, the supermodel wore a lacy white slip dress. The summer-ready style featured thin straps, as well as a nude lining and lace in the shapes of palm leaves. Hadid’s look was complete with gold bangles and hoop earrings, as well as a bright red version of Kors’ Greenwich handbag. The $298 style included a structured leather silhouette and gold chain handle.

“@michaelkors Miami Style…Coming Soon…” Hadid captioned the photo dump, which included shots of her in an animal-print dress with fellow model Alton Mason and getting her hair done for a photo shoot.

When it came to footwear, Hadid appeared to wear a pair of strappy white sandals. Though the style wasn’t fully visible, it included thin toe and angular front straps. The sandals created a monochrome look that was ideal for warmer weather. Though it’s possible the pair was flat, it likely included stiletto or block heels like many of the pairs run Kors’ spring and summer shoe lineups.

Strappy sandals like Hadid’s are a top warm weather and evening shoe, due to their sleek silhouette. Styles often feature thin crossed or single toe straps, as well as thin soles and stiletto or block heels. Aside from the Victoria’s Secret muse, stars like Addison Rae, Olivia Culpo and Gemma Chan have donned white sandals by Naked Wolfe, Amina Muaddi and Gia Borghini in recent weeks.

However, Hadid’s no stranger to the style, previously wearing pairs on the red carpet and even in Kors’ 007 capsule collection. She’s notably been a Kors muse for years, appearing on runways and numerous campaigns year-round, including last year’s Spring, Fall and Holiday ads.

When it comes to fashion, Hadid’s edgy style often combines grunge and early 2000s aesthetics for looks that mix vintage, and luxury pieces. Hadid often wears sneakers by Adidas, New Balance and Nike, plus trendy shoes such as Yeezy Foam Runners. The model can also be spotted in sharp pointed-toe pumps and sandals on the red carpet, from top brands including Christian Louboutin, Fendi and Miu Miu.

Sharpen your next look with bold sandals.