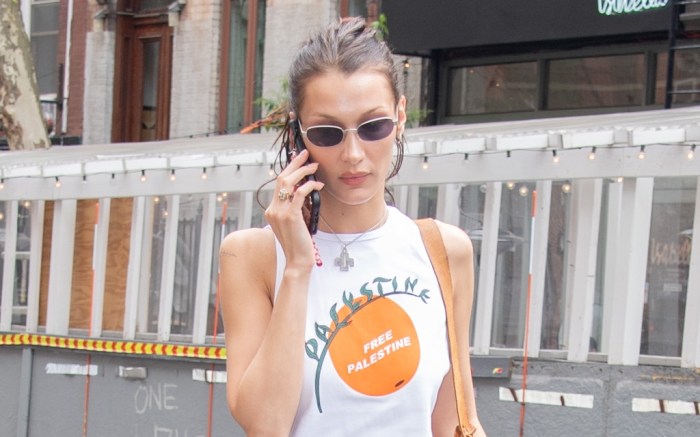 The supermodel stepped out in New York on Wednesday. For her outing, she paired a white tank top with “Free Palestine” across the top in an orange circle. She also wore black flared leggings and carried a beige puffy coat. She added a brown crossbody bag to the look and wore small black sunglasses. Hadid added a necklace, a bracelet and a few rings to the ensemble as well.

The 25-year-old went for her go-to shoe style: sneakers. She wore a red pair of kicks with elastic laces and black and gray detailing.

Hadid, a descendant of a Palestinian refugee family, has publicly supported Palestine and brought attention to the violence in the country. She posted several stories on her Instagram page on Wednesday on Al Jazeera’s Shireen Abu Akleh, a Palestinian-American journalist, who was shot and killed during an Israeli raid in the occupied West Bank city of Jenin on Wednesday.

Hadid is known for wearing some of the most sought-after designers on the runway and on the red carpet. Her off-duty style, however, skews more toward casual trends, favoring oversized pieces, cropped tops and ‘90s fashion inspiration. The socialite has modeled for Tom Ford, Givenchy and Chanel. She has also been a Nike ambassador and nabbed high-profile campaign deals with Calvin Klein, Michael Kors, Balmain and Dior.

Add a pop of color to your next look with these red sneakers.

Click through the gallery to see Hadid’s street style evolution over the years.