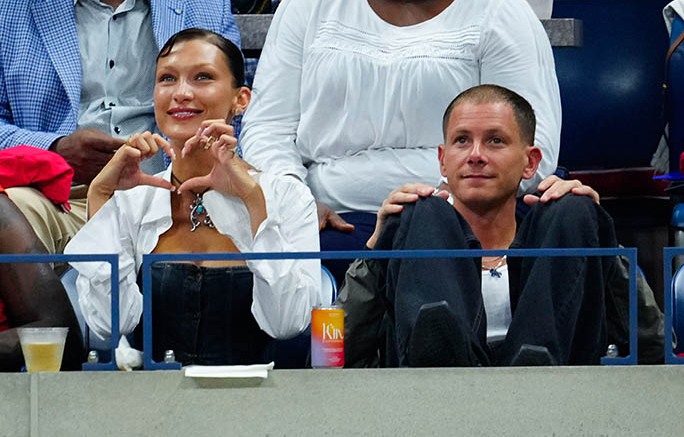 Bella Hadid took a street style approach to dressing while attending the women’s singles first round match between Serena Williams and Danka Kovinic of Montenegro held at the USTA Billie Jean King National Tennis Center in Queens, New York on Monday. Hadid joined a host of A-list celebrities at the match, which is anticipated to be the last for Williams as she announced her impending retirement from tennis earlier in Vogue’s September issue.

Hadid put her own trendy twist on a Canadian tuxedo for the occasion. The 25-year-old supermodel arrived alongside her boyfriend Marc Kalman in a cropped white button-down shirt that had a curved hemline and billowy sleeves.

The Kin Euphorics co-founder wore the staple piece over a denim corset top by Dolce & Gabbana that included tiny white spaghetti straps and buttons along the center. Hadid complemented the garment with baggy denim jeans that she kept cuffed on the end. The runway sensation styled hair in a bun and accessorized with a choker necklace, black shades and white Balenciaga purse. Hadid rounded out her look with flat shoes that featured white uppers and a black rigged outsole.

Hadid’s boyfriend Marc Kalman was casually dressed for the outing. He wore a dark grey jacket over a white T-shirt with black denim jeans and sneakers.

PHOTOS: Discover Bella Hadid’s street style evolution over the years in the gallery.