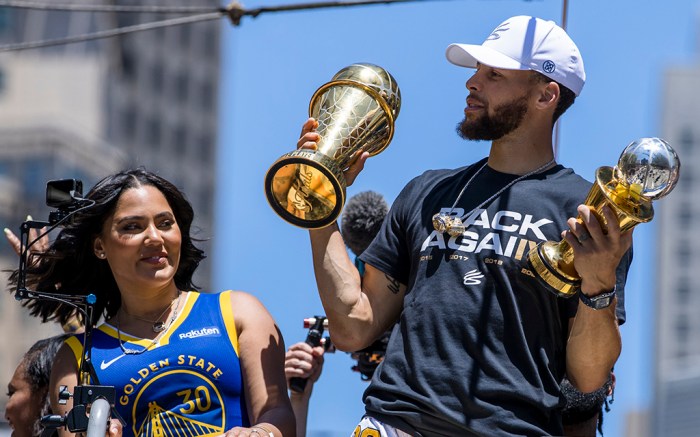 Ayesha Curry continues to celebrate her husband Stephen Curry‘s fourth NBA Championship win in style. The 33-year-old star attended the Golden State Warrior’s Championship Parade in San Francisco with her family, wearing an entire outfit made out of the MVP point guard’s jerseys.

While celebrating on the roof of the Warrior’s bus, Ayesha wore a fitted blue Golden State Warriors jersey with Curry’s number on it as a top. The star wore yet another blue Curry jersey around her waist, which seemed to be altered to create a skirt bottom for her two-piece look.

Ayesha was later seen at a parade after-party wearing a white “Home Coming” T-shirt as a dress, which featured a graphic of the Warriors bus with “2022 NBA Champs” written underneath. For footwear, Ayesha wore white trainers with black detailing on the heel paired with white tube socks with a black ankle stripe. The star wore a minimal makeup look, wearing her hair in a wavy bob.

In a video from the after-party, Ayesha is seen dancing on Steph in her “Home Coming” shirt, celebrating the win with her MVP.

Steph Curry and the Golden State Warriors pulled out a 103-90 championship win over the Boston Celtics in Game 6 of the NBA Finals on June 16. This is Curry’s fourth NBA Championship title, with the star player also winning MVP status for the 2021-2022 season.

As her husband vied for the NBA Championship, Ayesha was on the receiving end of some infamous Boston trash-talking due to her celebrity status. Most notably, a chalkboard sign posted outside of a Boston bar went viral mid-finals that read, “Ayesha Curry Can’t Cook.”

Ayesha Curry has made a name for herself as a television cooking personality and cookbook author. Though she has no formal training in the culinary sphere, she starred in a two-season Food Network show and authored her own cookbook “The Seasoned Life.” She’s also highlighted her passion for cooking via her YouTube channel. Throughout her career, Ayesha also opened several restaurants, launched a meal delivery service, partnered with food-adjacent brands, and supported efforts addressing childhood hunger.

And the Currys fought back. After Game 5 of the championship series against the Boston Celtics on June 13, Curry responded to the diss, wearing a graphic tee reading “Ayesha Curry Can Cook” to his post-game interview. After the Warrior’s championship win on June 16, Steph cheekily posed with a green “Ayesha Curry Can’t Cook” tee on Instagram Stories, posting the photo with the caption “Bye Boston.” Ayesha reposted that photo on her own Instagram, adding laughing emojis to the picture. The star also took to Instagram Stories to show off a green “Ayesha Curry Can’t Cook” pin she managed to grab at the stadium.

Fans at the Championship Parade were seen wearing “Ayesha Curry Can Cook” shirts in support of the star.