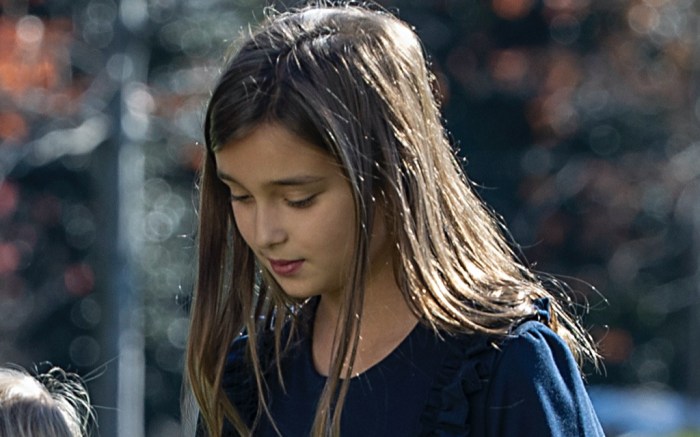 Arabella Kushner attended the FIFA Qatar World Cup games with her family. The eldest child of Ivanka Trump and Jared Kushner joined her parents and two brothers, Joseph and Theodore Kushner, at the Al Bayt Stadium in Qatar.

On Sunday, Trump took to Instagram to share several photos from their trip. “3 days, 4 matches, a ton of laughs and countless family memories made at the World Cup!” Trump wrote under the shot along with three soccer emojis.

Arabella looked adorable in the collection of images. The 11-year-old coordinated her look with her mom in a black and white outfit. Arabella wore a long-sleeve white top with a ruffled black skirt. For footwear, she completed her look with white and blue sneakers. Meanwhile, Trump wore a black top with belted white cream for the occasion and coordinated with Chanel flats.

In another photo, Arabella posed alongside her brothers in a black denim jacket and a khaki pleated skirt. To make sure that she captured all of the special moments, she accessorized with her camera.

The FIFA World Cup is an international soccer competition between senior men’s national teams within the Fédération Internationale de Football Association. The 2022 Cup will take place at Al Bayt Stadium in Qatar with 32 teams over 64 matches; the winning team will be announced on Dec. 18, taking home a prize of $42 million. This year’s opening ceremony included performances by Jung Kook of BTS, as well as Fahad Al-Kubaisi. The occasion is notably the most expensive World Cup ever from investments totaling $300 billion.