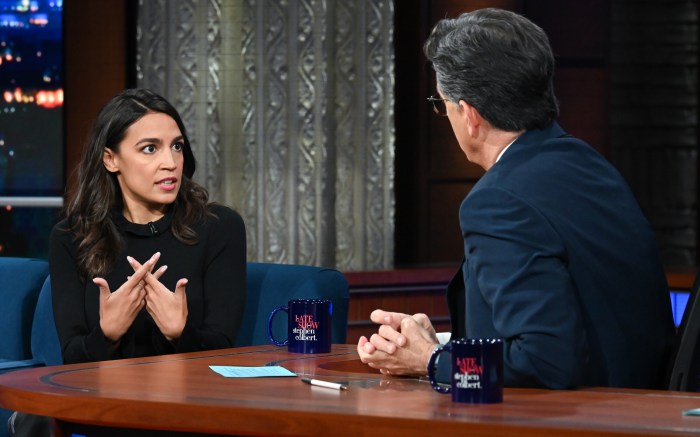 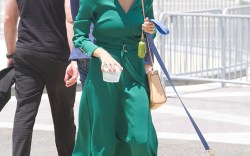 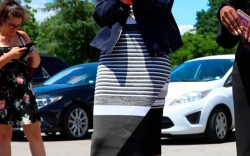 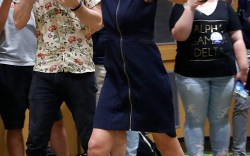 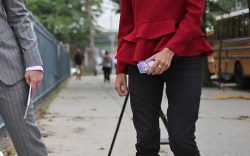 Congresswoman Alexandria Ocasio-Cortez made a recent visit to “The Late Show with Stephen Colbert,” giving her take on a particularly tumultuous time in the country’s political history. Though her thoughts and social justice-minded opinions took center stage during the late show appearance last night, AOC notably debuted a smart and stylish outfit, which helped her command the segment.

AOC wore a simple black long-sleeve top with a slight mock neck and minimal bow detailing at the slightly flared sleeves. She styled the top tucked into her below-the-knee black floral skirt, which featured delicate purple, white and pink flowers cascading down the silhouette. The congresswoman paired the look with black suede pointed-toe block heels. AOC wore her hair in a simple curled style, matching the business-forward style of her chosen look.

The 32-year-old congresswoman talked with host Colbert about the recent Supreme Court reversal of Roe v. Wade and the breaking news of former president Donald Trump’s alleged involvement in the Jan. 6 Capitol Riots.

During her visit, AOC called reports of Trump allegedly lunging at his own Secret Service after being told he couldn’t join the Jan. 6 Capitol Riots “stunning.” The congresswoman also talked about the need for congressional and presidential action in the aftermath of the Roe reversal, calling for a codification of Roe, same-sex marriage, the right to contraception, and interracial marriage.

Since the announcement of the ruling, which eliminates protections for abortions after nearly 50 years, major companies have announced their support to help employees who could be impacted by the ruling, including Target, Patagonia and more. Retailers and brands have signed on to various levels of commitments, ranging from travel and lodging reimbursements to obtain abortions to more vague descriptions of support.

Colbert also asked AOC if she planned on running for president in 2024, as the congresswoman will turn 35 about a month before the election. Predictably, AOC dodged the question, keeping attention on the current political climate.

“I think that we need to focus on keeping a democracy for anybody to be president in the next couple of years,” she said. “And that’s my central focus is helping the people of this country right now.”

Click to See Alexandria Ocasio-Cortez’s Style Through the Years