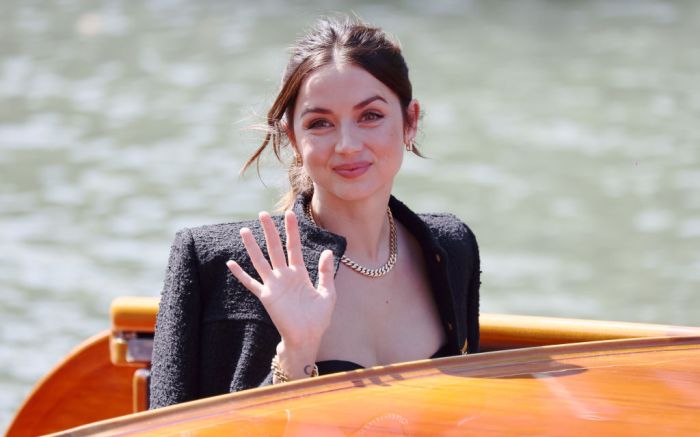 Ana de Armas had a standout style moment at the photocall for “Blonde” at the 79th Venice International Film Festival.

The actress, who stars as Marilyn Monroe in the film, wore a noir, monochromatic Louis Vuitton outfit for the event. Her look included a classic black top with a bustier silhouette, sweetheart neckline, and ruched gathering across its bodice paired with a mini skirt.

Armas layered her look with an oversize jacket resting on her shoulders that featured three pocket elements, button arrangements, and the luxury fashion house’s monogram on its lining. Her accessories entailed a gold chained necklace, bracelets of a similar design, and a square hooped and stud earring set.

For footwear, the actress slipped into open-toe black satin mules by Giuseppe Zanotti. The pair also had a chain detail, adding a pop of color to her look.

Armas was styled by Samantha McMillen, who has worked with Elle Fanning, Dakota Fanning, Charlie Heaton, and Brie Larson. McMillen has styled de Armas for other events, including Louis Vuitton‘s Cruise 2023 show in May, the London premiere of Netflix’s The Gray Man, and her L’Officiel Fall 2022 cover.

The 79th Venice International Film Festival previews upcoming films, with top Golden Lion awards heralded as predictors for the following Academy Awards. The 2022 ceremony, hosted by Rocio Munoz Morales, will run from August 31—September 10, with top contenders including “Blonde,” “White Noise,” “Bones and All,” and “Don’t Worry Darling.” This year’s jury will be chaired by Julianne Moore, who is joined on the panel by Mariano Cohn, Leonardo di Costanzo, Audrey Diwan, Leila Hatami, Kazuo Ishiguro, and Rodrigo Sorogoyen.