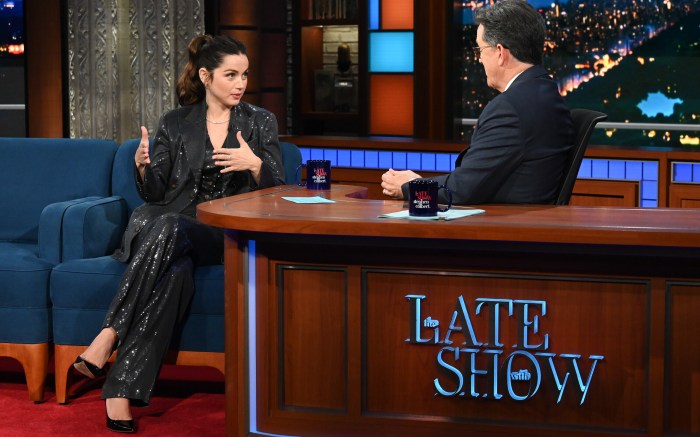 Ana de Armas stopped by “The Late Show with Stephen Colbert” to further promote the release of her new Netflix film, “Blonde.” In the highly anticipated biopic, she plays the starring role, portraying a fictionalized version of Marilyn Monroe.

For the interview, Armas wore a three-piece sequin suit by Brunello Cucinelli, which included a button-up vest. She wore the vest underneath a blazer with trouser pants all in a chrome charcoal gray color. The glimmering suit had double-breasted lapels that Armas styled with the blazer open to show off the layering of her outfit.

The shine of her suit is a much more feminine and glamorous take on how to wear a three-piece suit. The Cuban-born actress paired the entire outfit with minimal silver jewelry, including a pronounced diamond string Logan Hollowell necklace around her neck, and mini-hoop earrings. As for footwear, Armas chose classic black pumps by Jimmy Choo to elevate her look.

For shoes, the actress wore closed-toe patent leather pumps and her hair was styled in a high-pulled ponytail to give off an effortless look. Her makeup for her late night appearance had a toned down smokey eye to match the charcoal gray suit.

In the interview, Armas spoke to Colbert about the duplicity of playing Marilyn Monroe and how public perception shaped her image, even though Monroe, “wasn’t dumb and wasn’t a blonde.”