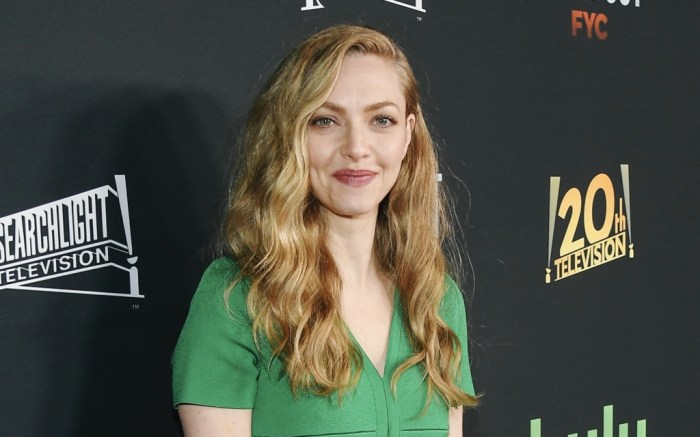 Amanda Seyfried was casual and cool on the red carpet last night for the finale of her Hulu miniseries, “The Dropout.” The series is based on the true story of Elizabeth Holmes, a biotechnology entrepreneur who was convicted of criminal fraud, and Seyfried plays the lead.

Seyfried arrived in a colorful frock. Her green mini dress included short sleeves as well as a V-neckline. The shift dress also featured stitching down the center. Seyfried kept her accessories to a minimum and wore her blond hair in loose curls.

The “Mean Girls” alum added some height to her frame with her shoes. She wore a pair of black strappy platform sandals that featured a large gold buckle and a block heel. The platform sole added at least an inch to the overall height of the heels, which reached around 4 inches.

The “Mamma Mia!” star has been in the industry now for over 20 years. Seyfried ventured into acting at a young age but began her career as a model. At 15 years old, she secured recurring roles as Lucy Montgomery on the CBS soap opera “As the World Turns” and Joni Stafford on the ABC soap “All My Children.” Over the past two decades, she has hit several red carpets and formal events. Recently, she attended the premiere of her new miniseries in a blue velvet Oscar de la Renta mini dress paired with silver reflective pumps by Le Silla.