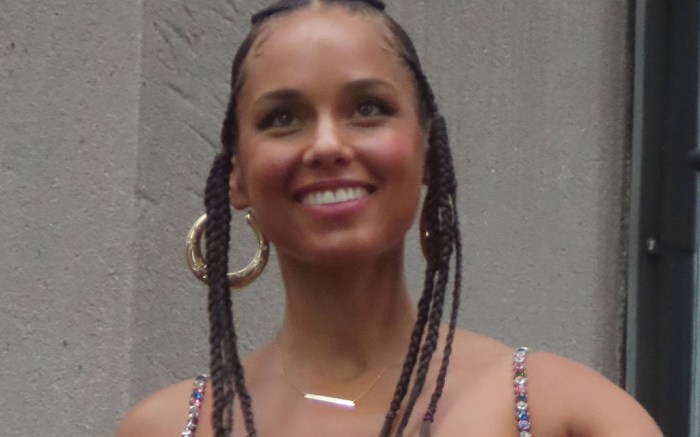 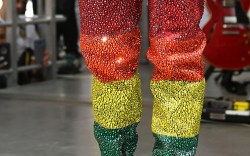 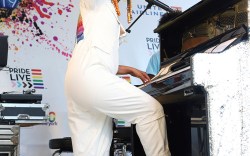 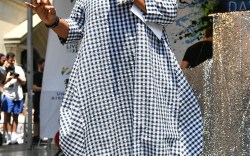 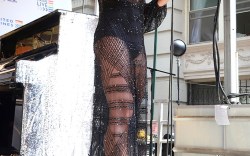 The 15-time Grammy award-winning singer was spotted in New York during a photoshoot on Aug. 11. Keys wore a flashy outfit on her day out, accounting for the brutal heat taking over the city.

Keys donned a glimmering crop top made of strung-together beads that cascaded and fell through the singer’s bodice. Some of the multicolored beads were strung in geometric shapes, while others hung down in shining rows catching the light. The beaded bra top was complemented by white high-waisted Dickies with paint splattered across both pant legs.

The “Girl on Fire” singer is known for having a fun sartorial fashion sense. She has an affinity for statement pieces that stay true to her comfortable and fashionable aesthetic.

When it comes to footwear, the same sentiments reigned true. Earlier this year, the 41-year-old commanded the audience at the Assago-Mi Forum in Italy with a sleek black and silver combo ensemble. The singer slipped into a black set with a mesh top and an illusion neckline. The top also included draping jewels that fell elegantly on her neck and chest. For heels, the New York native wore crystalized pumps.

When getting red carpet ready, Keys tends to wear gowns, often with flowing cape elements that tell a story with the pattern or design, from brands like Alexandre Vauthier, Valentino, Balmain and Moschino.

Keys typically opts for chic boots, versatile pumps and breezy sandals that range in color and style. When she’s working the stage, the songstress often opts for statement boots with exaggerated pointed toes that sharpen the outfit up, while offering a pop of color. The “Diary” singer is certainly no stranger to the fashion industry, having starred in campaigns for Givenchy, Stella McCartney, Levi’s and Tiffany & Co.

PHOTOS: Click to see what Alicia Keys wore to Pride 2019.