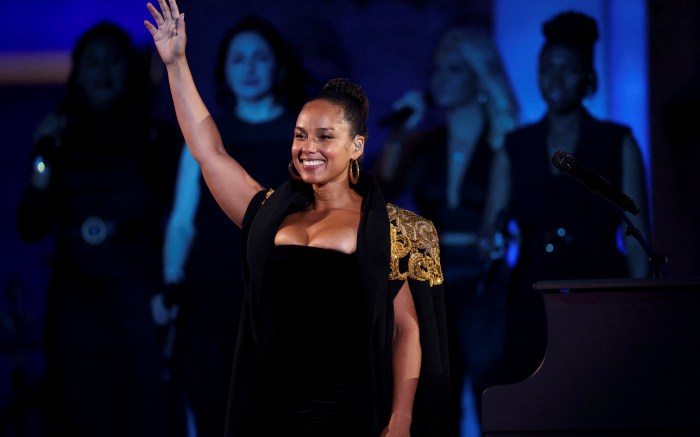 Alicia Keys made a statement on the stage at the Platinum Jubilee Party at the Palace.

Alicia Keys performs onstage during the Platinum Party at the Palace in front of Buckingham Palace on June 04, 2022, in London, England. Keys performed some of her hit songs like, “Superwoman” and “Empire State Of Mind”.

The “Girl On Fire” singer wore an all-black ensemble. The star began her performance seated at a grand piano, traveling the stage in a lengthy boxy black gown with a straight-across neckline. Overtop the boxy dress, Keys wore a black cape embellished with gold detailing on both shoulders. Keys played on the gold theme with her accessories, popping on large gold hoops, and speckling her updo with gold as well. While the shoes are hidden under the hem, based on her previous style cues, the star seems to favor a pointy pump. Regardless of what the star was wearing, Keys owned the night.
The Queen’s Platinum Jubilee celebrates Queen Elizabeth II’s unprecedented 70-year reign over the United Kingdom and associated Commonwealths. The Queen is the first British Monarch to achieve a Platinum Jubilee following seven decades of service to the throne, longer than any other British royal in history. The Platinum Jubilee, which runs from June 2 to June 5, is a four-day bank holiday that will include celebrations all over the U.K., including parades, performances, and other public gatherings.

Click through the gallery to see the looks thus far from the Platinum Jubilee Party At The Palace.