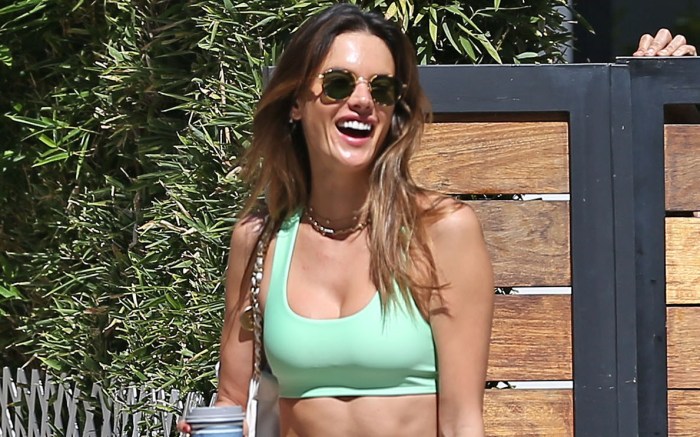 Alessandra Ambrosio was all smiles leaving a pilates class in Los Angeles with a cup of coffee in hand.

The Brazilian supermodel stepped out in a mint green matching leggings and sports bra workout set. The leggings were high-waisted, and she paired them with a gray sweatshirt which she eventually tied around her waist. The gray balanced out the vibrant green of the set.

Ambrosio’s look was thoroughly accessorized. She carried a small white Chanel tote bag over her shoulder. She wore two bracelets, one of which was a gold nail bracelet. The Brazilian model also had on a chain link necklace and another thin necklace. She also sported round frame sunglasses with a multicolor frame and dark green lens.

For footwear, the model slipped into a pair of two-stripe sandals. Ambrosio’s sandals are made of injected PCU and feature fixed buckles with a pink tie-dye print.

Arriving for class Ambrosio’s hair was up and out of her face and was then let loose after the class. She went with minimal makeup for the workout class. In addition to pilates, the former Victoria’s Secret Angel’s exercises of choice are yoga, running and beach volleyball.

The mother of two has been busy between Milan Fashion Week and becoming the face of a new campaign for Bottletop. The campaign is called ‘Representation, Regeneration and New Narratives’ and comes with the 20th anniversary of Bottletop.