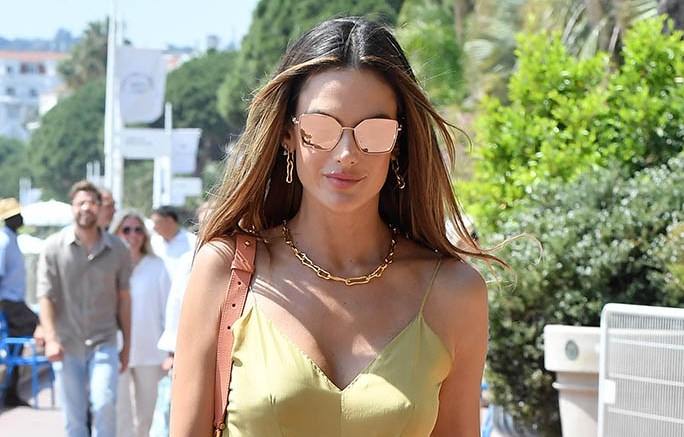 Alessandra Ambrosio has been pulling out all the stops for her looks during the 75th annual Cannes Film Festival in France. After stepping out in a stunning pink floral gown, the 41-year-old Brazilian supermodel turned two breezy separates into a matching set.

The former Victoria’s Secret Angel was spotted out in a soft beige outfit by Alberta Ferreti. Ambrosio’s outfit consisted a flowy maxi dress that she turned into top. The sleeveless silk garment had ruched detailing near the center, a flared hemline and delicately swept the floor as she walked. She teamed the lightweight number with wide-leg silk trousers. Designed for a polished appearance, the pants offer a tailored-style design complemented with front pleat detailing.

To give her look a luxe and glamorous finish, Ambrosio accessorized with rose gold tinted aviator sunglasses by Bvlgari, a choker necklace and dainty chain link earrings. The length of her pants allowed for a peek at her footwear, which appeared to be nude sandals that had a PVC strap across the toe.

PVC sandals re-emerged post-pandemic. The saucy style offers a sleek approach with a polished finish and adds length to any frame with its elongated silhouette. Delicate yet striking, bold yet sexy, the PVC shoe lends itself as the ultimate party-ready adornment ranging from ultra glamour to refined-pretty.