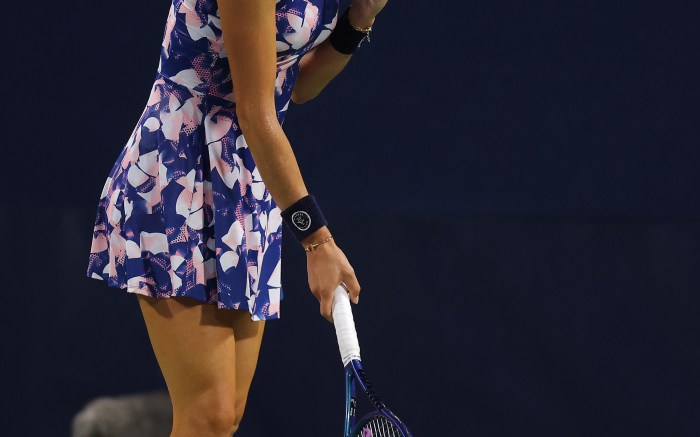 Ajla Tomljanović is set to face Serena Williams in round three of the U.S. Open, further to beating Evgeniya Rodina in an intense match at the USTA Billie Jean King National Tennis Center in Queens, New York City on Wednesday night.

Against Rodina, the Australian player wore a brilliantly printed tennis dress and bright blue visor as she claimed the win. Tomljanović wore a blue and purple design from Original Penguin, one of her ATP sponsors. The dress reached about mid-thigh, with spandex underneath for movability and breathability wear. With a tank top cut, the dress flared out from her waist. Her visor was also Original Penguin, tying the bright blue into the printed color on her dress.

For her racket and shoes, the tennis star opted for one of her other sponsors, Wilson. She chose a classic logo-string-printed racket and white tennis shoes with a green sole from the brand. The white shoes tied into the pops of white in her dress, while she wore black wristbands for contrast.

The Australian ace will face Williams on Friday, a match that is highly anticipated as it marks the last Grand Slam of Williams’s career.