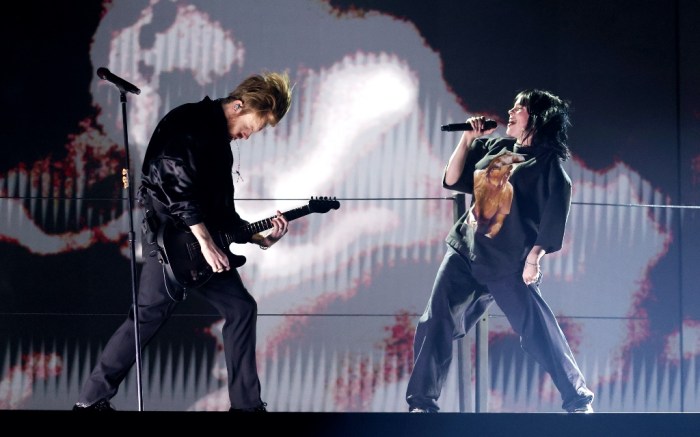 Billie Eilish honored a fellow musician in her Grammy Awards performance for hit song “Happier Than Ever.”

The Academy Award-winning musician performed with her brother, Finneas, at the 2022 Grammy Awards on Sunday in Las Vegas. The singer was up for seven nominations at the award show, including Album of the Year and Record of the Year for “Happier Than Ever.” She performed the track during the event.

Eillish hit the stage wearing a custom Willy Chavarria tee in tribute to late Foo Fighters drummer Taylor Hawkins. The oversized black tee featured a photo of Hawkins on the front. The “No Time to Die” singer paired the top with baggy black jeans as she gave her explosive performance alongside her brother, Finneas.

Eillish wore a casual pair of R13 platform sneakers with her stage outfit. White laces completed the pair, giving Eilish’s outfit a relaxed and easygoing nature. The ultra-chunky platform style is made of canvas and features a zipper at the back for easy on and off. Eillish has been known to wear this exact style in the past.

The 2022 Grammy Awards aired tonight at 8 p.m. ET on CBS, honoring excellence and outstanding achievement in the music industry for the year. Hosted by “The Daily Show’s” Trevor Noah, the show takes place in Las Vegas at the MGM Grand Garden Arena. Up for top awards this year are singer-songwriter Jon Batiste, who leads the Grammy nominations with 11 nods; Doja Cat, H.E.R. and Justin Bieber not far behind with eight nominations each. Performers include J Balvin, John Legend, Carrie Underwood and more.

Click to see the star-studded red carpet ahead of the 2022 Grammy Awards here.