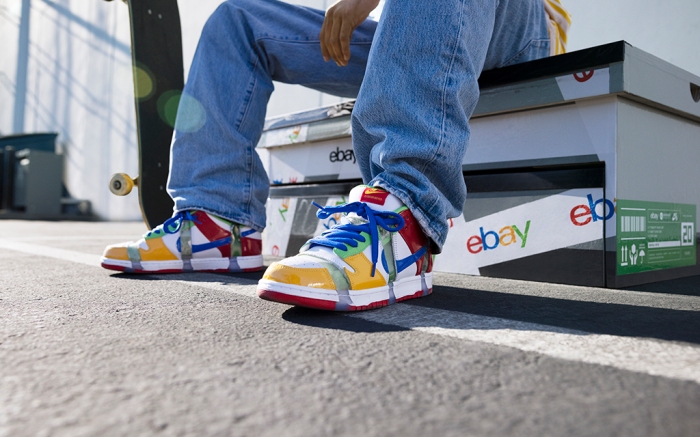 Sneaker enthusiasts have long turned to eBay for the latest and greatest in kicks. With the Nike SB Dunk silhouette’s 20th anniversary just around the corner, Nike has teamed up with the reselling platform, along with the Bodecker Foundation, to re-issue the coveted “eBay Dunk” with a modern makeover.

Twenty years ago, one pair of Nike SB Dunks, in the eBay logo’s colorway, fetched a whopping $30,000 at auction. The pair were then cut into pieces to ensure the value of the original and the proceeds were put towards building new skate parks throughout the Portland, Ore. area. The mysterious winning bidder and mastermind designer behind Nike SB was Sandy Bodecker himself.

Today, the re-released silhouette plays on the colorful history and significance of the shoe, keeping those nostalgic bright eBay hues, translating them onto a playful and contemporary backdrop. The style is almost an optical illusion, seemingly perforated as if it were chopped into pieces, as the original was. The space left in-between the cuts are clear, offering a peek at the inside.

Along with the revival, 10 collectors-edition boxes will be available at eBay.com/sbdunk for a seven–day auction starting on Dec. 7 at 7 a.m. PT/10 a.m. ET. Each pair includes a tribute to the original in tact eBay Dunk, as well as the 2022 release, and a cheeky commemorative saw all packaged in a shoe box you can actually skate on. All proceeds will go toward The Bodecker Foundation.

To celebrate the launch two brands will open the Skate ‘Em Out store in Portland. The store will give sneaker enthusiasts and skaters alike access to coveted Nike SB Dunk styles at their original 2002 MSRP of $65 a pair. To get this price, shoppers just have to lace up their Nike SB Dunk shoes and skate out of the store.

The general release design will launch at skate shops globally on Dec. 15, and on the SNKRS app on Dec. 17.

PHOTOS: Click through the gallery to see 50 years of Nike.