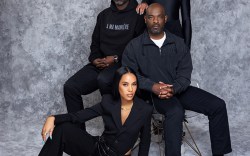 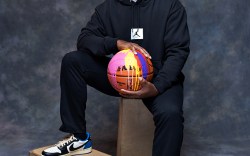 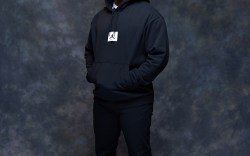 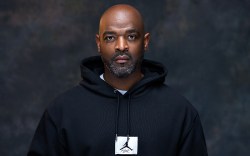 Always ready to deliver free game, James Whitner was a fount of wisdom during his cover shoot with FN, where he sat down with a former employee who now works at Atlanta’s Cam Kirk photo studio.

Two pieces of advice he shared: Keep your focus sharp and learn how to adapt. He also recommended some reading material: “I’m going to give you a book, ‘The Psychology of Money.’ It’s not about money, it’s about ego. I read it back to back twice. The biggest takeaway is: the difference between what you earn and what you save is your ego,” said the founder of Whitaker Group, which includes the A Ma Maniére, Social Status, APB and Prosper banners.

Mentorship isn’t foreign to Whitner, whose stores host events such as Free Game that offers guidance to those interested in footwear and fashion careers.

And in 2014, the North Carolina-based entrepreneur helped Marcus Jordan (son of Michael Jordan) get his Trophy Room store off the ground at the suggestion of Jordan Brand executives.

Marcus Jordan recalled to FN, “When I was trying to open my concept, my dad was gung-ho about me having some experience and wanting me to get an internship, actually work in a physical boutique. The workaround for me was to find a mentor I could shadow. That’s where James came in. Karie Conner at the Jordan Brand at the time introduced us, and ever since we’ve just clicked.”

Whitner continues to work intimately with the entire Jordan Brand family, as a collaborator and key retail partner.

He said his partnership with the company has flourished mostly because of their shared values.

“Jordan Brand’s declarative statement that they’re going to stand up and be the brand that connects to the Black community through streetwear, sports, lifestyle and fashion is the same thing we’ve done,” Whitner said.

This shared mission was on full display last year, when the two paired up on the most coveted sneaker release of the year: the A Ma Maniére x Air Jordan 3 “Raised by Women.” The look, a luxury take on the iconic basketball shoe, honored the strength and resilience of Black women and earned FN’s Collaboration of the Year honor.

“People loved it because rarely do Black women get light shined on them for the role they play in Black households. That story was paying homage to those women who raised us and sacrificed every day,” Whitner said.

Ever focused on community, his A Ma Maniére banner delayed the shoe release by a week last April, to create space for the Black community to heal after the Derek Chauvin trail and the killing of Ma’Khia Bryant, a 16-year-old Black girl in Ohio.

With their next project, the “Airness” Air Jordan 1 that debuted in December, Whitner and A Ma Maniére again delivered a powerful message. It was shared in a video narrated by Jordan Brand chairman Larry Miller, to highlight the Black community’s influence and resilience while facing exploitation and injustice.

“A lot of people would have been nervous to be part of that story. That’s where the power of the relationship shows up. It’s not about people’s feelings. It’s about doing the right things to move us all forward,” Whitner said.

Kris Wright, VP of Jordan Brand footwear and product merchandising, applauded Whitner for being unapologetic in his approach to storytelling.

“We focus on stories of the community that no one else wants to highlight. It takes courage to step out and be the voice for so many voices,” Wright said. “I appreciate James putting a sharp focus on Black women last year and the plight of young folks in the Black community. These are ongoing messages that are important for the marketplace to hear and understand.”

Although images of an A Ma Maniére x Air Jordan 2 collaboration have circulated online, both Whitner and Jordan Brand remain sparse on details. However, Jordan Brand did confirm his A Ma Maniére banner will release a collab in 2022.

This ecosystem that Jordan Brand has created, and the willingness to tell potentially polarizing stories, according to Whitner, has allowed for honesty to come to the forefront of sneakers.

“Jordan Brand has allowed our voice to be amplified and not watered down. Do you understand the importance of that? It adds purity to the marketplace,” he said.

“You can’t celebrate culture. You need to be culture,” he said. “Black History Month, it should be a celebratory month, but it shouldn’t be the only month we talk about the issues that Black folks face. Jordan Brand makes it about us every day.”