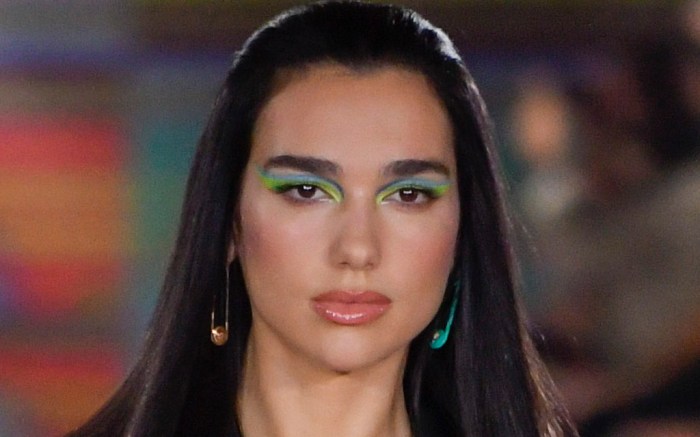 Revitalized trends from the 1990s and early 2000s have held strong on the fashion front in recent seasons and, for spring 2022, it seems these throwback styles aren’t going anywhere.

Versace debuted its spring ’22 collection during Milan Fashion Week today, lining the runway with buzzy attire and even buzzier names — think Gigi Hadid, Emilly Ratajkowski and even Dua Lipa. The “Don’t Start Now” songstress made her Milan Fashion Week debut in monochrome fashion with a Y2K twist. The first Versace look she modeled coated the singer in head-to-toe black from her peek-a-boo cutout blazer to her ruched tube skirt; both pieces incorporated a new signature touch for the Italian luxury house, safety pins.

The gold decorations offered another refreshed twist on late 20th-century fashion as did open cutouts and glam takes on menswear suiting. And to top it all off, the retro pieces came to a close with Dua Lipa’s sky-high heels à la Donatella. The triple-strap silhouette found the perfect middle ground between a block-heeled sandal and a platform base, all coated in satin shine.


In a second ensemble debuted on the Versace runways, Dua Lipa changed up the color tones with an all-pink look. The second monochrome moment continued the theme of hot pink that first blossomed in spring 2020 but this time around, it found a new glittering home. The iridescent, metallic appeal of the British singer’s look came through in a coordinating crop top and logo-trimmed skirt — a marriage of trends from the 1980s disco days and 1990s slinky silhouettes.

The final moment of note from Dua Lipa’s catwalk launch came with a twist on a growing sandal trend. Fisherman sandals are recognizable for their strappy nature and almost gladiator-like fit. Versace’s version also threw a flared heel in to the mix with bright 2000s-chic jelly pink uppers.


Beyond an award-winning music career, Dua Lipa herself dips her toes in the fashion world quite often. From sitting from rows at major shows during Fashion Month to selecting daring duds for red carpet appearances, she keeps things regularly exciting. The “New Rules” singer previously appeared in campaigns for YSL Beauté and Fragrance, Adidas and Pepe Jeans amongst others.

Her ensembles and style are credited to celebrity stylist Lorenzo Posocco; Dua Lipa is Posocco’s main clientele but he has also worked with Troye Sivan and Alex Demie in the past. Most recently, Dua Lipa signed on as a Puma ambassador with a multi-year deal as she serves as the face of its women’s business.

While Dua Lipa’s Versace sandals won’t hit shelves for months, you can echo her platform-style now in these similar shoes.

Click through the gallery for more of Dua Lipa’s glam taste over the years.