Kathy Hilton on the Heels Paris Would Never Wear, the Bag Nicky Hilton Steals and More From Her Closet Tour 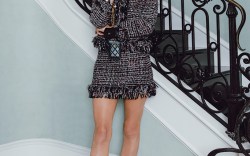 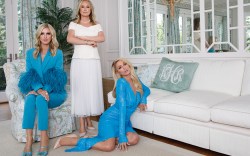 Paris and Nicky Hilton have long been style icons of the pop culture lexicon, ever since David LaChappelle captured their Barbie party girl aesthetic of pink, glitter, crystals, daring frills and over-the-top heels that would come to define the fashion of the early aughts.

But a look inside Kathy Hilton’s Bel Air closet for FN’s August cover story and photo shoot reveals that the sisters’ style rules, fashion influence — and evolution since that heady era — has come through the guidance of their mother.

While other Hollywood closets are organized to a clinical degree, meticulously color-coordinated and set designed with photo shoots and reality TV moments in mind, Hilton’s closet is refreshingly lived in. Among the various stands of costume jewelry draped across the countertops and crystal-studded Judith Leiber bags in all manner of objet (including a comical ‘90s-era cordless phone, which Paris gamely held during the photo shoot), there is a collection of lanyards from various concerts, conferences and events that the matriarch has attended over the years. Sitting on the carpeted floor is an Elizabeth Taylor-themed doll carrier, which the actress once signed for Hilton. And resting against the closet’s center island is one of her older daughter’s famous collages, a corkboard with ‘90s and 2000s-era pictures of friends and family members. “Oh Mom! I haven’t seen this in so long!” Paris exclaimed during the photoshoot in the closet.

That’s not to say Hilton’s style domain is in any way shabby: The shelves are lined with Louis Vuitton luggage (baggage check tags still attached), and an endless array of Chanel bags populate the glass-enclosed cabinets on one wall, though she revealed that a robbery of her own house close to the time of daughter Paris’s home invasions of 2008 and 2009 (immortalized in “The Bling Ring”) depleted a collection that had gone all the way back to the seventies, pre-Karl Lagerfeld.

One handbag that recently went missing from Kathy’s closet was an Hermès Kelly, a miniature style in a hot pink matte leather that Paris and Nicky bought Kathy for her birthday. “I came home from Paris and I went quickly to look and check on my things and I said ‘Where is my little pink purse?!'” Kathy recalled during the shoot, while matching her daughters in custom Juicy Couture velour tracksuits. “I thought, ‘Wait a minute, call Nicky.’ Called Nicky on the cell: ‘Do you have your mother’s pink purse?’ ‘Yes I do.'”

The recollection brought forth some confusion from Paris as to the difference between a Birkin and a Kelly — the two most popular handbag styles from French luxury brand Hermès. “Isn’t that the same thing?” Paris said during the shoot. “No, it’s not,” Kathy replied. “I’m happy that you don’t know all of that.”

On the opposite side of the room, a wall of shoes contains all the requisite nudes: Manolo Blahnik pumps and strappy Jimmy Choos, Christian Louboutin sandals, Nicky’s French Sole ballet flats scattered here and there (including one named “Kathy”). Lately, Hilton has been lusting over a pair of Aquazzura satin pumps in both green and black, the brand’s Proust style, with a crystal-studded star and moon on the toes.

But it’s a pair of ‘90s-era Manolos that Hilton says she will treasure forever. “It’s kind of like a Scalamandre fabric that I would have had or that my mother would have had in her living room,” she said of the pumps, which she has in both pale pink and golden yellow, done in a delicate floral silk jacquard that is also reminiscent of some of the upholstery in her own home.

“If you were to ask me ten years ago what’s the one thing you would not be caught dead in, I would say kitten heels,” Nicky said while holding a pair of Manolo Blahnik baby blue suede kitten heels from the closet. “But now I love them, and I wear them all the time.”

“I feel like my closet is a collection of a lot of things that I wear and I don’t wear that I love and when I walk into the closet they are old friends,” Hilton added. That includes plenty of Chanel jackets, including a carousel-themed black tweed number that her husband Rick bought for her some 20 years ago, its details hand-embroidered with metallic thread. Next to it, a velvet Yves Saint Laurent evening jacket with crystals shaped like fireworks sits in plastic, a purchase that Hilton made during a trip to Paris with Nicky. “For three days I thought, ‘Am I going to do this?’ I justified it in that I don’t wear fur and this is something I can use as my winter evening coat forever. I also thought the girls would probably want to borrow it,” said Hilton. “Joan Collins saw me in it and said, ‘Can I wear that? Can I borrow that tomorrow?’ I said yes, absolutely.”

Nicky has also benefitted from borrowing from mom: “When I come to L.A. I don’t even pack that much stuff, because I know that I have all of this at my disposal,” she said.

Hilton has always had an open-closet policy with her daughters, lending pieces such as eighties-era Zandra Rhodes gowns to Nicky and Oscar de la Renta bags to Paris — the latter brand having become something of an extended fashion family to the Hiltons.

“I think what’s so special about them is their warmth. Nicky and I are like brother and sister at this point, we do everything together,” said Fernando Garcia, co-creative director of Oscar de la Renta. The designer met the younger Hilton sister just as he and co-creative director Laura Kim were returning to the label after the death of the brand’s namesake designer. “She became very supportive of the idea of us coming back, and she quickly realized that I knew nothing about the world that was about to be thrust upon me. She sort of took me under her wing and taught me how to navigate those shark-infested waters.”

While the general public may best know the Hiltons for their early aughts fashion (and especially those Juicy tracksuits), the fashion world has a more nuanced view of the family. Each one has dabbled in design — and forged friendships with designers, including Jeremy Scott, Stacey Bendet of Alice + Olivia, Prabal Gurung and The Blonds. Last December, Paris, Nicky and Kathy all starred in Valentino’s resort campaign.

“They represent the importance of carrying a dynasty in a feminine and bold way, said Garcia of the Hiltons. “They are very confident and everything that they put on comes across as extremely effortless to the rest of the world. They know what their brand is and it’s something that’s very important to know when you’re in the limelight. Who is more consistent than Paris, Nicky and Kathy?”