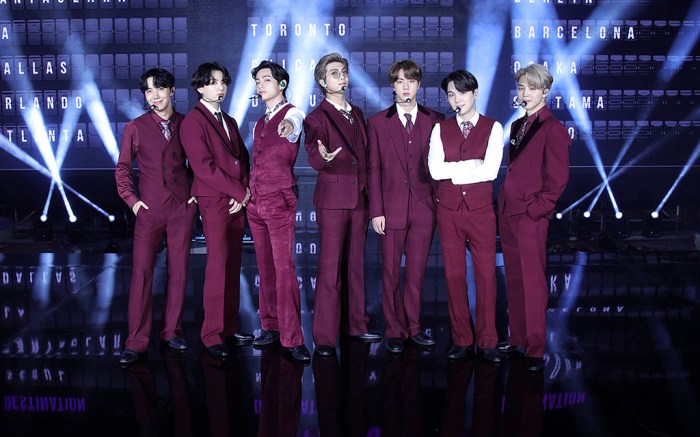 In anticipation of the upcoming virtual event, Louis Vuitton shared a video on Twitter of the BTS members receiving their special guest invitations to the luxury label’s Menswear fall ’21 presentation, designed by Virgil Abloh, on Jan. 21.

The video continues with the brand ambassadors handing each member of the South Korean boy band a Starbucks-inspired coffee cup with their names handwritten in black ink and the signature brown monogrammed pattern on the heat-protective sleeves. It commences with the BTS members joyously opening up their travel-inspired invitations and flying the logo-embossed wooden airplanes, included with the event package, around the room.

This partnership is among several other collaborations between the French design house and BTS, inclining fans to speculate whether the two cultural powerhouses will announce an official project together in the near future. In August 2020, all seven BTS performers wore Louis Vuitton menswear looks from the brand’s fall collection for their “Dynamite” music video, the band’s first song entirely in English.

Alongside this initiative with the Seoul-based group, Louis Vuitton has planned a series of events for its Paris Fashion Week Men’s fall 2021 debut. One of these notable projects includes the brand’s multi-media “Louis Vuitton: Walk in the Park” experience. With both physical and digital elements, this exhibit is open to the public between Jan. 8-31.