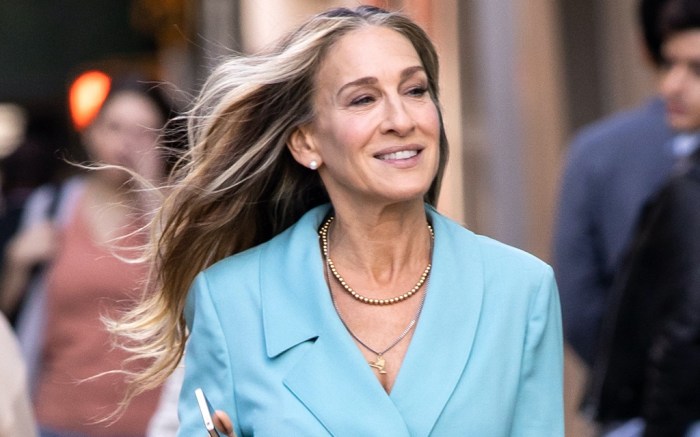 In the accompanying interview, the “Sex and the City” star discusses its forthcoming sequel series, “And Just Like That,” from the fashion she’s held onto from the original show to its meaning to numerous generations. One of her most notable points, however, addresses aging in “And Just Like That”—and how the public has responded to the new series focusing on women in their 50s.

In the interview, Parker highlights the double standard on women’s aging compared to men’s, specifically addressing if Carrie Bradshaw’s hair will be gray in the 2020s. “There’s so much misogynist chatter in response to us that would never. Happen. About. A. Man,” Parker tells Fry. “‘Gray hair gray hair gray hair. Does she have gray hair?’ I’m sitting with Andy Cohen,” the star continued in the piece, “and he has a full head of gray hair, and he’s exquisite. Why is it okay for him? I don’t know what to tell you people! Especially on social media.”

Parker also clapped back at the focused attention on her aging—and those of other women—from society and social media.

“Everyone has something to say. ‘She has too many wrinkles, she doesn’t have enough wrinkles.’ It almost feels as if people don’t want us to be perfectly okay with where we are, as if they almost enjoy us being pained by who we are today, whether we choose to age naturally and not look perfect, or whether you do something if that makes you feel better,” says Parker in the interview. “I know what I look like. I have no choice. What am I going to do about it? Stop aging? Disappear?”

Within the editorial, Parker wears a variety of outfits both reminiscent of her standout style—and, naturally, Carrie Bradshaw’s. On the cover, she wears a strapless pink Dolce & Gabbana Alta Moda gown embroidered with large gold and silver flowers.

In other viral images from the shoot—captured in a video from Vogue‘s Instagram—Parker also wears colorful and textured tops, skirts and dresses by Christopher John Rogers, Alexander McQueen, Fendi and Balenciaga. Dramatic hats by Valentino Haute Couture and Libertine add further flair as well. One of the shoot’s most notable images features Parker strolling in a metallic Dior gown, Chanel coat and her own SJP by Sarah Jessica Parker pumps on the streets of New York City, with flowing curls instantly reminiscent of our favorite onscreen columnist. And just like that…Carrie Bradshaw is back.