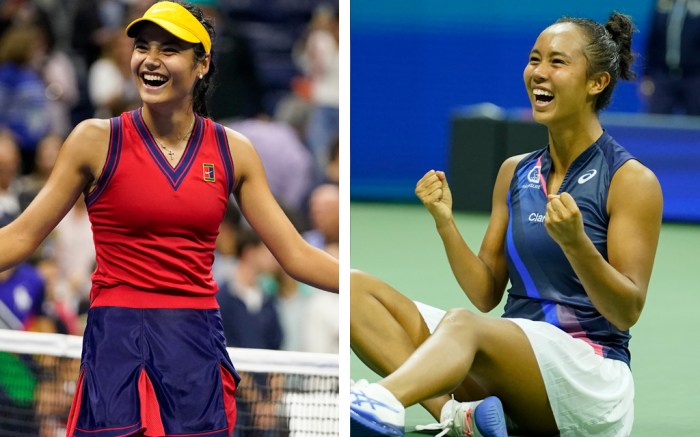 As the finals for the US Open approach, the tournament is gaining a few new unsung heroes taking over the ranks in the women’s competition.

Beating out the veterans and multi-hyphenate athletes are none other than two unseeded teenagers who have never competed in a single Grand Slam final: 19-year-old Leylah Fernandez and 18-year-old Emma Raducanu. Facing off in Arthur Ashe Stadium on Saturday, the battle marks the first major final between two teenagers since Serena Williams’ 1999 US Open win over Martina Hingis.

Here’s what you need to know about this year’s young tennis stars:

Leylah Fernandez hails from Quebec, Canada, and is currently ranked 73rd in the world. The 19-year-old athlete already has one career WTA Tour singles title under her belt from the 2021 Monterrey Open. In her junior’s career, Fernandez made it to both the Australian and French Open finals, earning a Junior Grand Slam win at the 2019 French Open.

Fernandez is backed by Asics and also has sponsorships from Birchbox, Babolat and Telcel.

Emma Raducanu comes from Bromley, England, and ranks at 150th in the world. At just 18 years old, the Brit has won three singles titles in the ITF Circuit but has yet to receive a title in a WTA Tour final. During her Wimbledon debut earlier this year, Raducanu made it to the fourth round as a wildcard. Looking to defy odds, the teenager is the youngest to reach US Open finals since Maria Sharapova in 2005 and the lowest-ranked US Open semi-finalist since Kim Clijsters in 2009.

Raducanu has a major shoe and clothing sponsorship from Nike. For her racquet of choice, she also has a contract with Wilson.

Click through the gallery to see more major moments from US Opens past.