Zendaya Takes a Walk on the Wild Side in a Tiger Stripe Coat, Biker Shorts & Fall’s Biggest Boot Trend 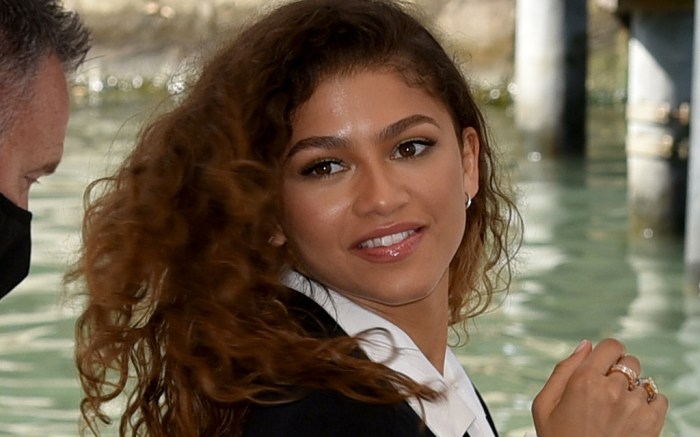 Zendaya has the eye of the tiger this week for Maison Valentino.

Stylist Law Roach gave fans a behind-the-scenes look at the actress‘ latest photoshoot with the Italian luxury house on Instagram last night. For the shoot, Zendaya modeled head-to-toe Valentino kicking off with a statement tiger-stripe coat formed from a black and white fabric; the outerwear came layered over a black bralette and coordinating biker shorts.

When it came to footwear, the “Euphoria” star modeled branded leather combat boots, tapping into one of fall’s biggest trends.

Balmain shared a closer look at the piece as well, explaining that the design was “inspired by the #BALMAINFW21 universe and styled by @luxurylaw. In line with the house’s couture tradition, the custom piece was crafted from a cast model of the star’s bust.”

To give her own outfit a monochrome appeal, the “Shake It Up” alumna tapped Christian Louboutin in the brand’s signature stiletto heels. The So Kate pointed-toe pumps included a 5-inch heel, pointed-toe front and rounded vamp; similar colorways retail for $745 at Saks Fifth Avenue.

When it comes to the world of fashion, Zendaya is a major name to lock down for a brand. With help from her longtime stylist Law Roach, the “Greatest Showman” actress oftentimes leans towards styles from Maison Valentino — as she is a house ambassador — along with Area, Versace, Armani and more top labels. For footwear, it can range from Nike and Vans sneakers to Christian Louboutin and Jimmy Choo stilettos.

Try out combat boots for yourself in these lifted pairs inspired by Zendaya.

Flip through the gallery to see Zendaya’s style evolution over the years.