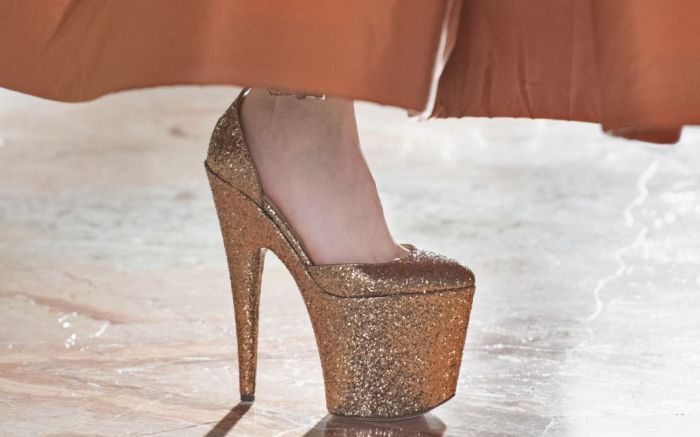 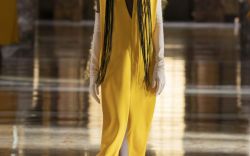 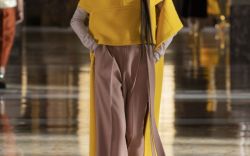 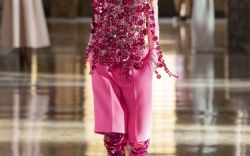 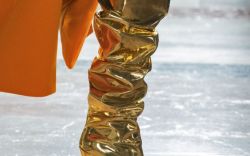 It’s no secret that heels have not exactly been popular during the pandemic. Slippers, sneakers, embellished babouches, Birkenstock Arizonas — these are the shoes being worn right now. Even as the fall ’21 men’s shows have made their way across virtual screens and couture shows have begun, shoes have remained mostly sensible, flat and slipper-like, even when ornately crafted.

Until Valentino. The Italian fashion brand showed its usual flair for drama with a new series of over-the-top platforms that are reminding us at the height of the pandemic that there will be life after it — and it will likely involve some very high shoes.

The garments were actually much more casual than the dramatic couture showings of the past, aside from a few evening gowns at the end. There were cozy blanket coats in shocking pink, warm sweater vests over crisp shirting, pleated trousers and Bermuda shorts, cutout pencil skirts, smart but statement-making leather gloves that crept up the arm.

But what the clothes lacked in typical Valentino grandeur, the shoes made up for:  There were plenty of ankle strap pump silhouettes, which extended into a gigantic block platform, all done in patent leather. Then there were a series of slouchy, crinkly leather boots that appeared to go up to the thigh; they also featured the a heeled platform with the same gravity-defying height as the ankle straps.

There were also platforms for men, as the collection featured couture menswear for the very first time for brand (and a first for couture as a whole — though bespoke menswear has its own separate legacy and history). Smart lace-up brogues matched garments like intricately embroidered and laser cut overcoats or a bright yellow suit with a sequin shirt underneath.

The platform brogues were actually worn on both men and women on the runway, highlighting the gender neutrality of the collection.