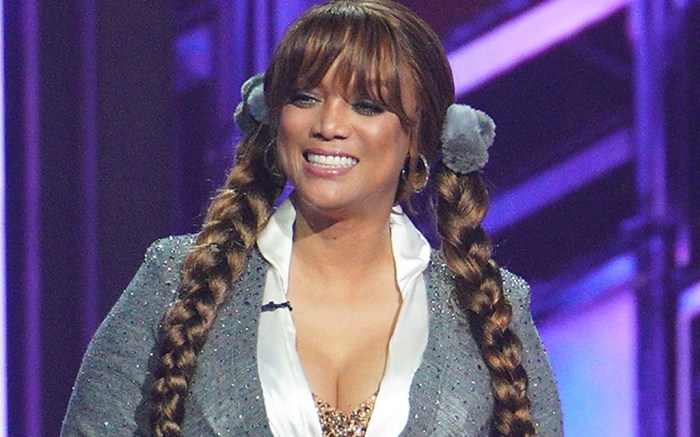 Tyra Banks is channeling everyone’s favorite 2000s pop star this week on “Dancing With the Stars.”

For the episode, Banks and the rest of the cast paid homage to the one and only Britney Spears with themed dances and looks. The host herself gave her take on Spears’ signature outfit from the “… Baby One More Time” music video back in 1998; the ensemble includes a school girl-inspired outfit with a gray sweater and white collared shirt as well as a black mini skirt.

Banks made the look her own with the addition of a glittering bralette and a floor-sweeping wrap for her skirt.

When it came down to footwear, the model rounded out the themed look with a set of platform black combat boots.

As for Banks’ personal style, her bold costume on set falls in line with her typical bold taste. From her modeling career in the 1990s to her style on and off the red carpet, the television personality prefers styles from brands like Marc Bouwer, Gianvito Rossi, Saint Laurent and more.

She also signed on as an ambassador for Nine West in 2019, adding to her lineup of campaigns alongside Yves Saint Laurent, Tommy Hilfiger and Dolce & Gabanna amongst other major names.

Channel Tyra Banks in these similar boots below.

Check out the gallery to see more of Britney Spears’ own iconic looks over the years.