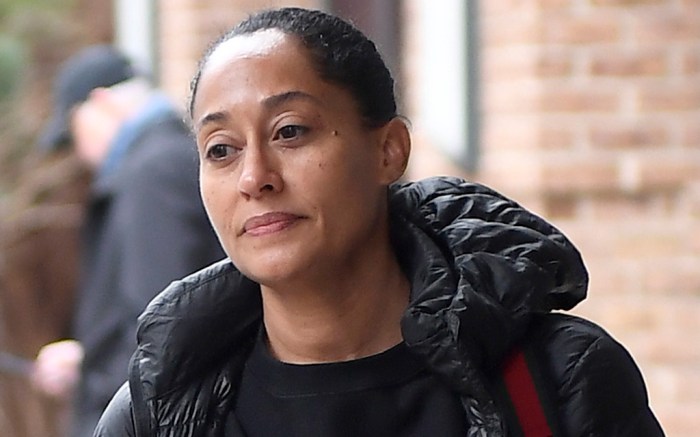 Tracee Ellis Ross gave a sign of support for her on-screen daughter this week in the coolest way.

The “Black-ish” star took to Instagram to show off her new tracksuit courtesy of Yara Shahidi and Adidas. Shahidi, who plays Ellis Ross’ daughter on the ABC series, launched her collection last week featuring pieces inspired by the “Grown-ish” actress‘ Iranian roots. Pulling Persian influences with statement graphics, the new satin top retails for $180 with matching pants selling for the same price at Adidas.com.

Ellis Ross’ own outfit came complete with the final piece from the new collab: Superstar sneakers. Transforming the classic silhouette, Adidas explained that the iteration blends “’60s vibes with elements of Shahidi’s Iranian heritage and Black roots.” The sneaker features cream uppers accented by hazy yellow and legacy gold detailing with an Arabic lace jewel at the forefoot.

You can shop the Yara Shahidi x Adidas Superstar sneakers for $110 on the German athletic brand’s website.

Shahidi herself modeled the new pieces at the MTV Movie & TV Awards this past weekend. For the red carpet, the actress layered the set with a yellow Etro bustier and a pair of towering pumps with a low-dipping vamp and lifted heel from Louboutin.

Throughout her time in quarantine, the “High Note” star used social media as an outlet to connect with her fans about her television series and about everyday life. And even as lockdown measures have eased, the star has continued to give glimpses into behind-the-scenes style moments from her TV series, as well as real-time looks at her home life and workouts in Asics sneakers.

As a modern style figure, her closet isn’t lacking in designer labels. Some of the luxe brands in her collection include Christopher John Rogers, Loewe, Bottega Veneta and Christian Louboutin. She also has starred in campaigns for Kenzo’s spring ’17 collection alongside Jessie Williams of “Grey’s Anatomy.”

Click through the gallery for more of Tracee Ellis Ross’ glam looks over the years.