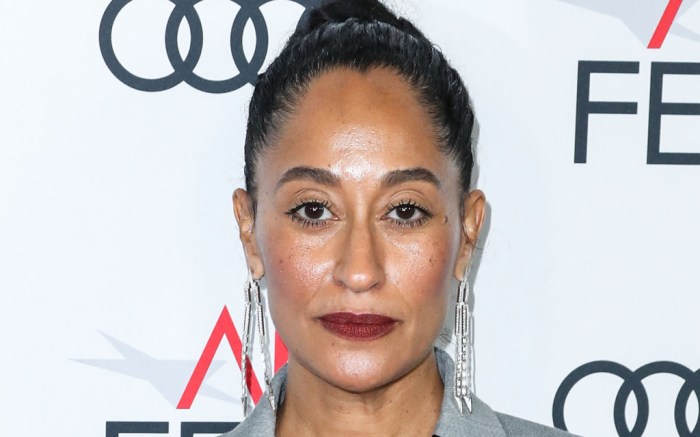 The “High Note” actress opted for an unmissable red suit for the occasion, tapping Los Angeles-based designer Sterling Ruby; the internationally oversize design came adorned with leather paneling that quotes Clement Clarke Moore’s poem “A Visit from St. Nicholas” — or, as its more commonly referenced, “‘The Night Before Christmas.”

To give her own suit a twist of her signature edgy style, though, Ellis Ross opted against pumps or heels and instead decided on another seasonal trend: combat boots. Her pair in particular taps the North Face and Gucci’s buzzy collab.

The two brands announced their buzzy joint collection in December 2020 and it is already one of the most talked-about collaborations of the new year. Though the capsule first released through a series of pop-up shops, the designs have already graced the likes of A$AP Rocky, Jennifer Lopez, Jared Leto and more major stars in the past few weeks. Ellis Ross herself opted for the collab’s $1,490 hiking-inspired boots, available at Gucci.com.

The collection pulls together the best of high-fashion design and outdoor aesthetic with a mix of beanies, jackets, tees, boots and accessories. By bringing the best of their appeals together, Gucci and North Face pulled inspiration from the growing return to comfort styles and wanderlust desires that grew out of the extended at-home quarantine period in 2020.

Throughout her time in quarantine, the “Girlfriends” star has used social media as an outlet to connect with her fans about her “Black-Ish” series and about everyday life. And even as lockdown measures have eased, the star has continued to give glimpses into behind-the-scenes style moments from her TV series, as well as real-time looks at her home life and workouts in Asics sneakers.

As a modern style figure, her closet isn’t lacking in designer labels. Some of the luxe brands in her collection include Christopher John Rogers, Loewe and Christian Louboutin. She also has starred in campaigns for Kenzo’s spring ’17 collection alongside Jessie Williams of “Grey’s Anatomy.”

Click through the gallery to find more of Tracee Ellis Ross’ top footwear moments over the years.