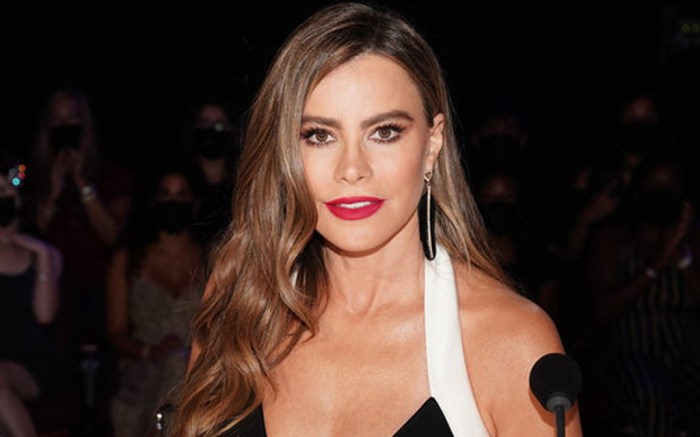 Taking her seat at the judge’s table, the “Modern Family” actress wowed in a plunging two-tone jumpsuit courtesy of Balmain. The halter design featured contrasting hits of black and white with sailor-style pockets with gold buttons across the waist.

As for Vergara’s co-star, Heidi Klum found a way to incorporate practically every major print into her latest look and she did so with flair.

The model took her seat on the judge’s panel in a full Dolce & Gabbana look for last night’s episode. The ensemble featured a perfectly mismatched lace bustier top, a silky floral robe and high-rise pants coated in stripes of florals, cheetah print and baroque patterns.

When it came down to footwear, Klum made sure not to pull any attention away from her attire by instead slipping on a subtle set of black heels. The pointed pumps featured a peep-toe silhouette with a lifted stiletto heel for a glam finishing touch.

When it comes to her own personal style, Vergara herslef can oftentimes be found in towering pairs of heels and stilettos, previously sporting styles from Giuseppe Zanotti, Saint Laurent and Amina Muaddi in addition to her beloved Christian Louboutin heels. For more casual occasions, the actress taps her own denim line with Walmart, Sofia Jeans by Sofia Vergara.

The star also can be found in ads for Foster Grant, modeling styles from her debut collection with the eyewear brand. In addition to offering glasses, Vergara and Foster Grant also plan to donate one pair of reading glasses to Restoring Vision for every pair of eyewear sold; RestoringVision empowers lives by helping millions of people regain their sight across the globe.

And, as if all of her titles weren’t impressive enough, the Colombian-American actress also served as a brand ambassador for the Italian fashion house Dolce & Gabbana and appeared in a campaign to promote the label’s new Devotion handbag last year.

Click through the gallery for more of Sofia Vergara’s glam style over the years.