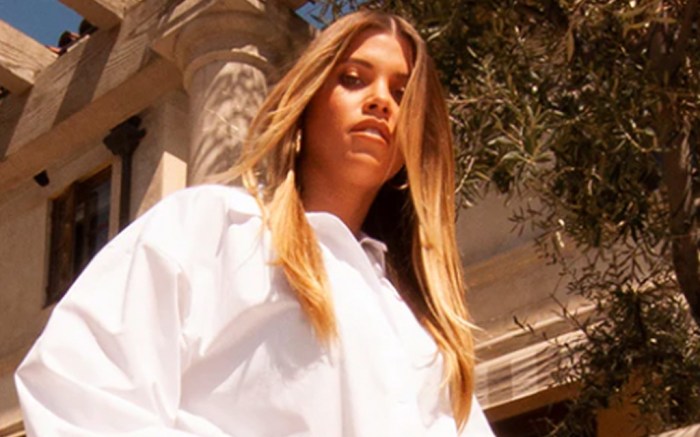 Sofia Richie and PrettyLittleThing joined forces once more for a brand new collection just in time for spring.

The media personality and brand ambassador released a 19-piece collab for the UK-based retailer, modeling the new designs herself in style. In one peak warm weather-ready ensemble, Richie opted for her new balloon-sleeve shirt dress, a design that typically retails for $48 but can be found on sale now for $31 at PrettyLittleThing.com.

The outfit also included a trending footwear silhouette for spring and summer: thong sandals. Richie’s particular style also featured bold leg-snaking straps and a towering 4.5-inch heel, all retailing at a discounted price of $36 (was $55).

Thong-toe footwear returned to the celebrity scene last year as one of spring and summer’s biggest trends and is expected to stick around in 2021. Be it classic flip-flops or thong-toe heels, the minimalistic silhouette falls in line with a ’90s-inspired revitalization of fashion, as seen with shoes like square-toe styles and pops of neon color. Stars like Chrissy Teigen along with Meryl Streep and Gabrielle Union amongst other major names are continuing to support the trend in even cooler temperatures.

Richie herself included another thong footwear silhouette in the collection, this time in a flatter iteration. The chunky ’90s-inspired form highlights faux leather uppers and a flatform midsole.

When it comes to footwear, in addition to PrettyLittleThing, Richie often taps to DSW for her more wallet-friendly picks. The brand ambassador first collaborated with DSW in May 2020 when she, as well as Reebok and Vince Camuto, came together to use footwear for good. She announced that DSW and the two brands would be donating more than 100,000 new shoes to frontline workers. Since then, the media personality has continued to share a selection of her favorite styles from the retailer across social media, matching the pairs to everything from workout apparel to chic summer dresses.

In addition to joining hands and feet with DSW, Richie previously has created her own capsules with brands like Frankie’s Bikinis and Misguided as well as starred in campaigns for Mackage, Tommy Hilfiger, Rolla’s Jeans and more. The media personality‘s own rotation of relaxed footwear includes everything from Fendi slides to APL sneakers and fuzzy Ugg slippers.

Click through the gallery to find more of Sofia Richie’s top street style looks over the years.