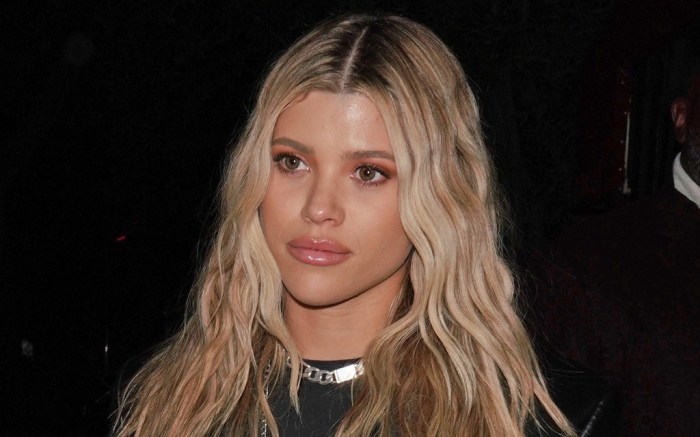 The model took to Instagram this afternoon in a bold twist on business casual, pairing an unbuttoned collar shirt with an oversize black blazer and the widest hair-inspired necktie. Instead of matching the formal pieces to tailored trousers, Richie instead donned a black low-rise mini skirt complete with cutoff hem.

As for footwear, Richie elevated her own suit style with towering stiletto mules; the teetering pair included a peep-toe finish with an iridescent rainbow cross-toe strap.

Suiting up has become the new normal amongst celebrity style trends thus far in 2021, potentially led in part by the first-ever female Vice President Kamala Harris and her neverending lineup of perfectly tailored power suits. Stars including Tracee Ellis Ross, Heidi Klum, Christina Aguilera, Hailey Baldwin and more have already pulled off the trend this season with more bold looks to come.

Richie herself is a major fan of the trend and recently broke out a more classic version for her off-duty look. The tan blazer and pants came complete with buzzy Nikes; the Air Max Exceehe, which are nearly sold out at DSW.com, come with a $90 price tag.

When it comes to footwear, Richie often taps to DSW for her more wallet-friendly picks. The brand ambassador first collaborated with DSW in May 2020 when she, as well as Reebok and Vince Camuto, came together to use footwear for good. She announced that DSW and the two brands would be donating more than 100,000 new shoes to frontline workers. Since then, the media personality has continued to share a selection of her favorite styles from the retailer across social media, matching the pairs to everything from workout apparel to chic summer dresses.

In addition to joining hands and feet with DSW, Richie previously has created her own capsules with brands like Frankie’s Bikinis and Misguided as well as starred in campaigns for Mackage, Tommy Hilfiger, Rolla’s Jeans and more. The media personality‘s own rotation of relaxed footwear includes everything from Fendi slides to APL sneakers and fuzzy Ugg slippers.

Make your outfit pop in these iridescent heels inspired by Sofia Richie.

Click through the gallery to find more of Sofia Richie’s top off-duty looks over the years.