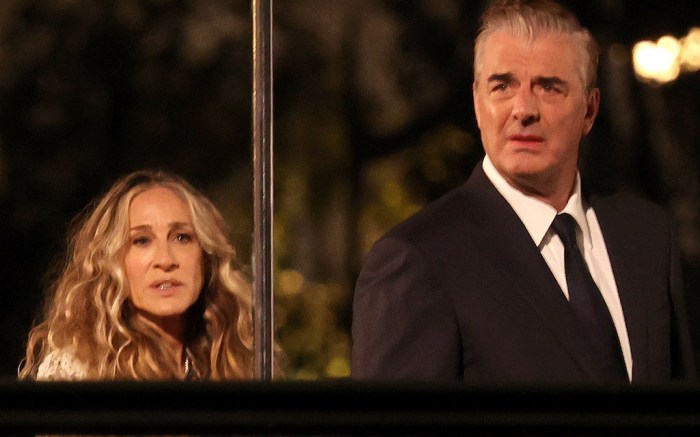 Sarah Jessica Parker is taking on a whole new city for her upcoming show, “And Just Like That…”

Filming the “Sex and the City” reboot series, the actress joined her on-screen husband Chris Noth — AKA Mr. Big — in Paris this weekend. Together, the duo arrived on set for the show in dressed-up attire. Parker modeled a green floral dress for the episode complete with a dramatic bubble skirt and a lace cardigan layered on top. The very Carrie Bradshaw outfit also included strappy silver sandals set atop a lifted stiletto heel.

As for Noth, the actor was styled in a classic suit complete with a white button-up shirt and a black tie.


At one point on set, Parker kept warm by adding on an oversize white puffer coat and holding tight to a miniature statue of the Eiffel Tower.

While the FN cover star herself is best known for her iconic role as Carrie Bradshaw in the HBO series, Parker’s list of accomplishments stretches beyond television. Parker started her eponymous shoe brand in early 2014. Styles are handcrafted in Italy, with resort, spring, pre-fall and fall collections released each year. When she isn’t in pieces from her own collections, the actress also taps everything from Ugg to Prabal Gurung and Isabel Marant.

Check out the gallery to see more moments from the “And Just Like That…” set this year.