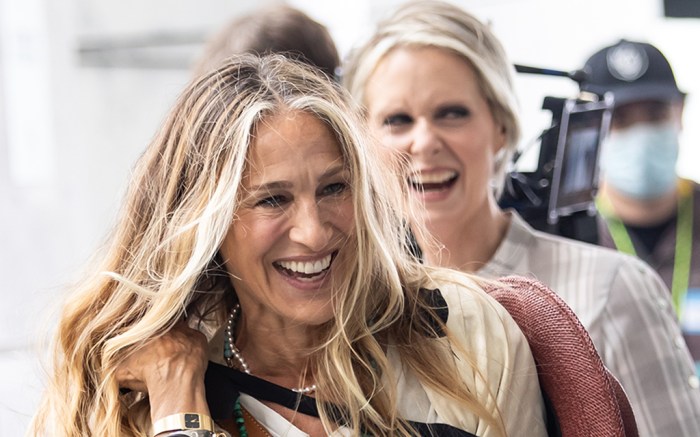 It’s official: “Sex and the City” is coming back and Sarah Jessica Parker and Cynthia Nixon are giving us a much-needed preview in New York today.

The two actresses were spotted on set in New York this afternoon, getting into character in glam fashion. Parker channeled her best Carrie Bradshaw in a classic white tee tucked into a houndstooth pleated skirt with a cardigan and wide-brim hat to tout. As for Nixon, the Miranda Hobbes actress showed off her lawyer-chic style in a button-up shirt and wide-leg trousers.

When it came down to footwear, the on-theme attire continued with unique heels. Nixon opted for classic pumps with a pointed-toe and nude upper.

As for Parker, SJP gave us an on-brand Carrie Bradshaw choice with towering platform heels; the round-toe design came set atop a 2-inch base with a sturdy block heel and a strappy finish.

Rounding out the group, Kristin Davis — also known as Charlotte York — joined the group on Parker’s Instagram today in her own character-inspired look. The outfit highlighted an off-the-shoulder polka dot top with a pencil skirt and pointed-toe pumps.

While the FN cover star herself is best known for her iconic role as Carrie Bradshaw in the HBO series, Sarah Jessica Parker’s own list of accomplishments stretches beyond television. Parker started her eponymous shoe brand in early 2014. Styles are handcrafted in Italy, with resort, spring, pre-fall and fall collections released each year. Parker was also meant to star alongside Broderick in the Broadway revival of “Plaza Suite” before Broadway shows were forced to stop production due to the coronavirus pandemic.

Click through the gallery for more of the best “Sex and the City” looks over the years.