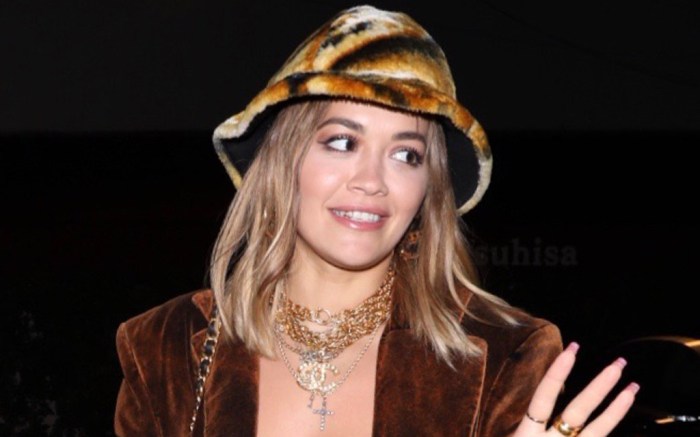 Rita Ora released her new EP today and already has fans going wild, adding fuel to the fire with a new music video as well.

The British singer promoted her “Bang” EP on Instagram last night and this morning, sharing looks from the upcoming video and album cover photo shoot. In one look, Ora gave her take on monochrome styling as she modeled the fuzziest cutout dress and sleek pumps that buckled up the length of her leg in a series of attached straps.

In another look for her album artwork, Ora again went for another all-black look but this time, it was a cutout bodysuit that kicked things off. The bold long-sleeve number came matched to a coordinating hat and sleek knee-high boots.

“#BANG EP OUT NOW!!! SO SO HAPPY IT’S FINALLY HERE! LINK IN BIO! Go go go listen/share/send me your fav songs! Love you all so so so much couldn’t have done this without you,” wrote the musician in her caption.

Beyond her chart-topping music career, the “Phoenix” singer also has appeared in campaigns for DKNY Fragrances, Roberto Cavalli and Rimmel London, and she serves as an ambassador for Escada and Thomas Sabo. Most recently, she was one of the few stars to attend Fendi’s in-person spring ’21 show during Milan Fashion Week.

And Ora’s experience with the footwear industry goes beyond chic street style. She has been a longtime Adidas partner and collaborated with Giuseppe Zanotti in January 2019 for an exclusive collection of shoes. This year, she also announced a partnership with German footwear retailer Deichmann. And if that wasn’t enough, Ora recently joined forces with ShoeDazzle for a series of fall footwear styles that all retail for under $100. Coming with everything from thigh-high boots to trending utilitarian styles, the pairs can be found at ShoeDazzle.com with wallet-friendly price tags.

Click through the gallery to check out more of Rita Ora’s bold street style moments over the years.